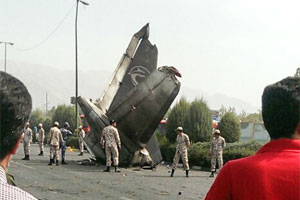 All seven on board killed when the twin-engined turbo-prop Commander aircraft went down in the mountains outside Sistan-Baluchistan’s capital of Zahedan, IRNA said.

State-run Fars news agency reported that two generals including Mahmoud Sadeghi, a senior officer in charge of investigations into the deaths of police in the province, and a colonel, were among the dead.

The wreckage of the aircraft that left Tehran for Zahedan has been found but the cause of the crash remains unknown, IRNA said.

According to state-run Tasnim the plane disappeared from the radar screen at 19:20 local time (1550 GMT) around the southeastern city of Anar.

The seven dead include five police officers, including a general and three colonels.

Technical failure and collision with an object were the causes of the crash, the report said.