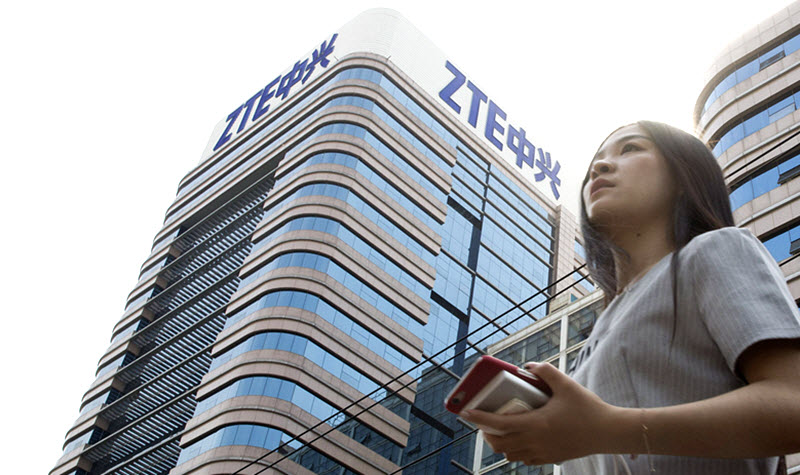 ZTE Corporation, the Chinese multinational telecommunications equipment and systems company, one of the country’s leading telecom equipment manufacturers, was caught and fined for exporting US technology illegally to Iran.

It was ordered to reprimand the employees responsible for this, including withholding bonuses, but it failed to do so. It was announced earlier this year that the US Department of Commerce was therefore banning American companies from exporting to ZTE for seven years.

Just over a month ago, ZTE announced that it had suspended the trading of its shares and its “major operating activities” and manufacturing in an effort to overturn the ban. It confirmed that it was working with the US government on the matter and a few weeks later the US Secretary of Commerce announced that the company is to pay a fine of $1.3 billion and put a further $400 million in escrow to be seized if ZTE fails to deliver on its promises again.
ZTE is also obliged to ensure that a team of compliance officers, managed by a “special independent compliance coordinator”, oversees the company’s activities. ZTE is to fund the compliance team that will report to the company’s CEO, its commerce department and the board. Furthermore, these measures are to remain in place for a decade. The final condition is that the senior leadership team and the board of directors will be replaced in their entirety. If ZTE fails to comply with all of these conditions, then it will not be able to continue purchasing from American companies.

ZTE has now started trading again but the future of the company is uncertain as several US Senators have put an amendment on the deal that would put an end to the agreement set by the Trump administration. A “must-pass” defense authorisation bill has appeared and it would result in the original ban on the Chinese firm regarding the purchasing of US components being reapplied.

The recent measures taken by the Trump administration against Iran are affecting companies worldwide. Many companies that have been dealing directly with Iran are pulling out in fear of US sanctions.
The National Council of Resistance of Iran (NCRI) has warned that those doing business with the Iranian regime are funding terrorism and the Iranian regime’s belligerent acts in the Middle East. The main opposition has called on foreign companies and leaders to think twice before doing business with Iran and has highlighted that the human rights crisis should be addressed first.

On 30th June, the NCRI will be hosting its annual rally in which tens of thousands of Iranians gather in Paris. It is expected that the many speakers – politicians, policymakers, dignitaries, human rights activists from around the world – will speak about how their countries can ensure that the people of Iran are factored into the Iran threat.

In previous years, many speakers have expressed their dismay that the business deals and investments are still being carried out with a government that does not even respect the most basic human rights of its own people.

Previous articleGovernments Weigh up Consequences of Us Sanctions on Iran
Next articleIran: Porters Continue to Be Persecuted by Iranian Regime