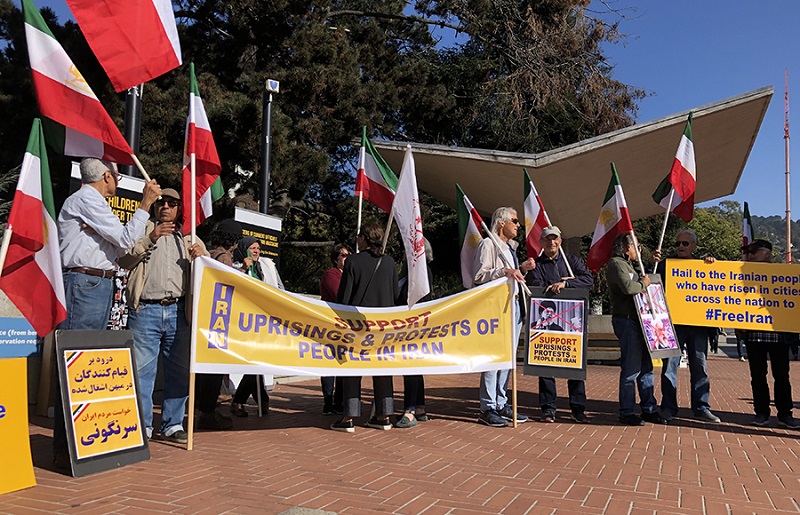 “I want (Iranians) to live in a peaceful society with its neighbors and be able to bring the Iranian people economic stability and grant a prosperous society,” Shafi told the Daily Californian.

While mentioning the internet blackout in Iran the report said: “Campus freshman and IACNorCal member Seena Saiedian expressed his concerns regarding Iran’s recent major internet blackout. He added that he will not have information about the condition of his family in Iran until the communication in the country is restored and that this blackout seems to show the government’s weakness.”

“We are confident that, with the uprising of people in Iran, now is the time that achieving the goal of democratic change in Iran is very realistic,” Hamid Azimi said.

The nationwide uprising in Iran erupted on November 15, 2019, over the sudden increase of fuel and gas rationing.

Tehran and other cities are witnessing ongoing protests as the Iranian people have risen for regime change in at least 180 cities across the country, with at least 450 killed and over 4,000 people injured by the regime’s oppressive security forces. Reports also indicate more than 10,000 protesters have been arrested.

Previous articleRouhani, His Interior Minister Express Fear Over Scope of Uprising, Demand Broadcast of Forced “Confessions”, Extracted Under Torture
Next articleIran Protests: Fifteenth Day of the Uprising for Regime Change