Iranian-Americans Rally in DC for Regime Change — by Iranians 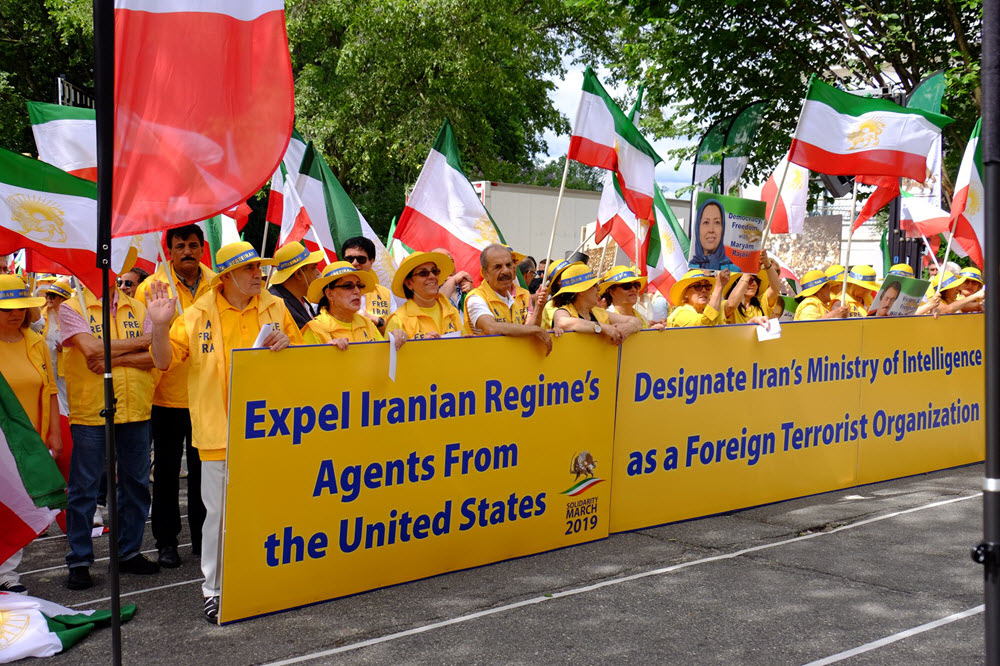 Thousands of Iranian-Americans attended a recent rally in Washington and had one of their appeals answered Monday: President Trump sanctioned Iran’s Supreme Leader Ali Khamenei, the Washington Examiner wrote on Tuesday, June 25. A top priority of the Friday rally attendees will take a lot longer to accomplish, but they insist they don’t want the administration to do it for them: regime change in Iran.

The article added: The phrase “regime change” might be anathema in Washington, but that didn’t stop rallygoers in front of the State Department and White House Friday from chanting, “Change, change, change. Regime change in Iran.” They came to Washington from 40 states to attend the Organization of Iranian American Communities event to show support for the people in 160 cities and towns inside Iran who have been protesting the Islamic Republic’s regime, on and off, for the last year and a half. The rally took place as tensions between Washington and Tehran were at their height, with Iran having shot down a U.S. drone over international waters the day before, but it had been organized well in advance.

“It’s always important to come and be in solidarity with Iranian Americans who are for regime change. And also to represent for the Iranian people and the rest of the world knowing there is a strong resistance that’s been around for 40, 50 years, and make sure they hear our voices loud and clear,” Los Angeles resident Delaram Ahmady, 26, told the Washington Examiner. Her family fled to the United States when she was 3 after her father, jailed for eight years in the 1980s, feared becoming a political prisoner again.

“We don’t want an attack, we don’t want war. We just want backing of the Iranian people and the Iranian resistance,” she said. “I think it’s important to distinguish regime change when there’s a strong resistance in place.” She hoped the Trump administration would put even stronger sanctions on the regime. “That would put pressure on them economically as well as getting them to remove their hands from terrorist activities in the Middle East.”

Current and former lawmakers of both parties addressed the crowd in front of the State Department before they marched to the White House — and they didn’t shy away from calling for an end to the regime either, the report said.

“We’re here to remind our friends in this building and the White House that there are some things about the regime that must be remembered. There is no reforming the mullahs in Tehran,” former Democratic New Jersey Sen. Bob Torricelli said. “We need regime change, and we need it now.”

Two California congressmen spoke, Republican Tom McClintock and Democrat Brad Sherman. “The U.S. Justice Department has charged two agents of the Iranian regime for its collecting of intelligence of Iranian opposition members here in Washington. I’m sure their agents are watching our videos now,” Sherman said. “Let them see the future of Iran.”

Organizers and attendees of the rally did not call for any military action against Iran, the Washington Examiner wrote, adding: They spoke in support of increased sanctions, including on the supreme leader, and called for the Ministry of Intelligence and Security, responsible for repressing protests inside the country and planning attacks on dissidents abroad, to be declared a foreign terrorist organization, as Iran’s Revolutionary Guard was in April.

“You’d be surprised, the maximum pressure campaign that is going on is supported by a majority of Iranians,” Homeira Hesami, a Dallas medical physicist in her early 50s who was a political prisoner in Iran shortly after graduating high school at 16, told the Washington Examiner. She came to the United States because the regime would not let her attend college in Iran. Her cousin was executed in 1988. “I really owe it to him, my friends, the people I saw in prison,” she said in explaining why she flew to Washington for the rally. She saw a 13-year-old in prison who had been tortured. “She couldn’t even walk. That’s the sacrifice people have made.”

“Regime change is not something you’re going to impose from outside. It’s what people inside Iran want,” Hesami said. “Regime change is not a bad thing if the country wants it.” She supports the administration’s “maximum pressure” campaign. “It’s emptying the pockets of the regime.”

“I understand the president being hesitant about a military attack that will cost lives. But I would counsel him that if the United States can be attacked with impunity and our military vessels, manned or unmanned, destroyed and the United States does not respond, it’s an invitation not simply for the Iranians but the North Koreans, the Russians, the Chinese, a host of other countries. We will pay a huge price,” Torricelli told the Washington Examiner. “The Iranians not only attacked an American drone, they attacked two oil tankers in international waters.”

The former senator had a very specific recommendation on retaliation: “They have an extremely small, very limited navy. I think we should eliminate their navy. They have three ships. They should have none.”

Fellow Democrat Bill Richardson, a former New Mexico governor, energy secretary, ambassador to the United Nations, and 14-year congressman told the Washington Examiner: “There should be a response but not necessarily a military response, perhaps additional sanctions.”

He thinks America should also work to “build an international coalition to protect the vessels that go through this Persian Gulf” and “to stop Iran from building enriched uranium facilities.”

The Washington Examiner added: The White House did take notice of the Iranian American voices outside the building. On CBS’s Face the Nation Sunday, Vice President Mike Pence discussed the administration’s Iran policy and said, “What we want to do is stand with the Iranian people, thousands of whom gathered outside the White House on Friday, and thousands of whom took to the streets last year in communities across Iran.”