NCRI – Unbearable poverty has led one Iranian man in his thirties in north-east Iran to decide to sell one of his eyes in order to earn enough to be able to feed his children.

While many struggling Iranians each day put up one of their kidneys for sale as a source of income in what has become a dark habitual practice in Iranian society, this shocking case involves a 34-year-old father of three who had already sold a kidney six months ago for the equivalent of $2000 in Tehran.

In a rare admission of the level of poverty and destitution among the Iranian population, the state-run daily Shahrara on Saturday (August 8) published the account of the man, which it only identified as M., who was attempting to sell his eye in the city of Mashhad. 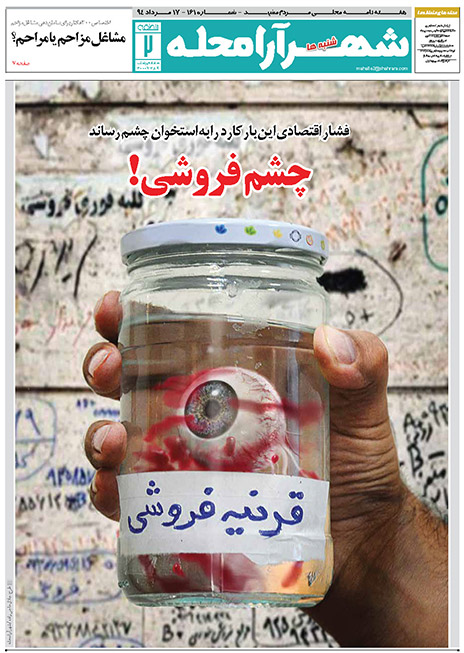 M. had scribbled on a neighborhood wall: “Eye for sale,” under which he had written his contact number.

When contacted several days later, M. had agreed to meet up with a person he had thought was a potential buyer at a bus stop in the city.

In the meeting, M. immediately said: “Madam, be frank. In the end how much will you pay?”

When at first a figure of the equivalent of $670 was suggested, M. said that this was too little and he would be unwilling to sell his eye for this amount.

“Six month ago I sold my kidney in Tehran for $2000. I am now under a heavy financial burden and I’m willing to sell my eye for this amount as well,” he said.

Explaining why he was willing to sell his eye, M. said: “I have three children, and our landlord has given us notice to leave. I am illiterate and out of work and I have to pay the costs of my wife and children. My eye is yours. You can do with it as you please.”

“There’s no hope left for me, but I don’t want my children to grow up on the streets. What difference does it make to me to have one eye or not.”

“I don’t have anything. I can no longer tolerate this poverty. Do you even understand what it means to have nothing? What it means to eat dry bread? It’s abundantly clear for me that I will end up selling my other organs too. What difference does it make if I have an arm or not? A leg or not? If I have to, I will even sell my skin.”

“Right now there are two buyers who are willing to buy (my eye) for this price and pay all the hospital fees too. I’m also planning to advertise online tomorrow, and if the advert appears nationally I could probably earn more than this.”

The impoverished Iranian man then agreed to be contacted again the following day to hear the buyer’s final offer. With that he walked away.

A day after the article was published other Iranian state media outlets including the official news agency IRNA in concert rejected the report as unfounded.

“The bitter reality is that the overwhelming majority of Iranians are living in poverty and destitution due to the regime’s policies and conduct, such as spending an estimated $300 billion on its nuclear weapons program; and plundering astronomical amounts of the nation’s wealth has become common practice among the regime’s top officials who live a lavish life of luxury,” said Shahin Gobadi, spokesperson for the People’s Mojahedin Organization of Iran, PMOI (Mujahedin-e Khalq, MEK).

The Iranian regime’s supreme leader Ali Khamenei and his family have amassed a huge fortune, amounting to billions of dollars, even as the people of Iran including a majority of the working class have been struggling to make ends meet.

Much of Khamenei’s personal wealth is in the hands of his sons and daughters, large amounts of which are held in banks in the United Kingdom, Syria and Venezuela. Read the full report here.