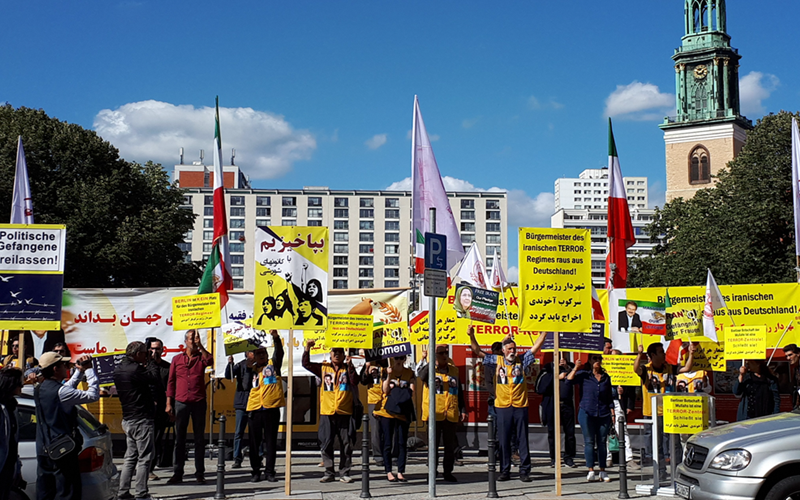 Berlin: The Iranian community based in Germany, supporters of the People’s Mojahedin Organization of Iran (PMOI, Mujahedin-e Khalq or MEK), on Friday, September 7, 2019, held a protest to denounce the presence of the Mayor of Tehran Pirouz Hanachi in Berlin.

The protest was held outside the entrance of the Red Town Hall (the building of the Berlin state government), where the mullah-appointed Tehran Mayor was supposed to be welcomed.

Given the strength of the protest, authorities were forced to take Hanachi through the municipality’s back entrance and garage.

The head of the office of the Berlin state government Prime Minister said there would be no red carpet for Hanachi and he would not be signing the Golden Book of Berlin.

Last week, protests against this visit gained widespread political dimensions in Germany. Nearly all the factions in the Berlin state parliament protested to Mayor Michael Müller. The head of the Christian Democratic Union group in the Berlin parliament, Burkard Dregger, described the invitation as intolerable and called for its cancellation. Kai Wegner, head of the CDU Party in Berlin said Muller must not appear in any photo-op with Hanachi and must cancel the meeting altogether. The United States Ambassador to Germany Richard Grenell said the Revolutionary Guards-affiliated Mayor of Tehran belongs on the US and European sanctions lists, not on the VIP stand in Berlin.

The protesters denounced the presence of the representative of the terrorist mullahs’ regime in Berlin as a “political disgrace” and called for an end to the policy of appeasing the regime. They reiterated that welcoming the mullah-appointed Mayor in Berlin is a regretful sign of the European Union and Germany’s failed Iran policy. This policy is banking on the corrupt mullahs instead of the millions of Iranian citizens who strive for an end to the religious dictatorship in Iran.