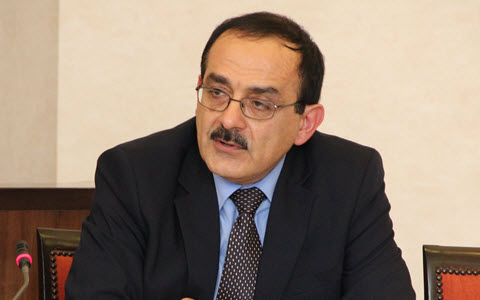 Several members of parliament and senators from different political parties spoke in this meeting which was chaired by Ms. Els Van Hoof, member of the Foreign Affairs Committee of Belgian Parliament from the Christian Democratic Party.

In this meeting also Mr Firouz Mahvi from the foreign affairs committee of the NCRI, delivered the following speech:
I would like to thank Mrs Els Van Hoof and the Belgian Committee of Parliamentarians and Mayors under the leadership of Mr Dirk Claes for holding this meeting today.

As it has been said already, the situation of human rights in Iran is very bad. Many prisoners are executed in Iran which according to Amnesty International, if we exclude China, more than 55 percent of the executions in the world tool place in Iran under the presidency of Hassan Rouhani.

A member of Rouhani’s cabinet, as minister of justice in the first 4 years was a self-confessed executioner who was a member of the death committee in Tehran during the 1988 massacre of thousands of political prisoners. The new minister of justice is also another official responsible for many executions in south of Iran in 1988. This minister has also been in the EU black list since 2011.

So we should ask the European governments how can you have a normal relations with a government whose minister of justice is in the EU black list for human rights violations?

Also many other cabinet members used to be commanders of Revolutionary Guards (IRGC) which has been responsible for many killings and human rights violations in Iran and for many terrorist operations outside Iran. IRGC is the ideological army of the supreme leader Khamenei.

IRGC also runs most off Iran’s economy. Many companies are directly or indirectly in the hands of IRGC. So private sector does not mean much in Iran.

So when some European leaders such as Mrs Mogherinri keep encouraging companies to go to invest in Iran, we should remind them that they are most probably dealing with IRGC. This is against the interests of the people of Iran and only helps the regime to stay longer in power.

I think the members of parliament, who are elected by the people, should be role models for their own governments and should always insist that they should represent European values which are democracy, human rights, women’s rights and rights of minorities. This is what the people of Iran expect from Belgian parliamentarians to remind the government to put these values first instead of trade and business.

As I mentioned earlier about the 1988 massacre, I should add that this campaign to seek justice for the victims of that massacre began by Mrs Rajavi more than a year ago. This has now become a nationwide campaign which has shaken Iran. We are calling for an independent investigation to prosecute those responsible including the current justice minister of Rouhani.

The reason people of Iran have tolerated the mullahs, is because of the executions and this atmosphere of fear and terror. Despite this fear, last Sunday, Iran witnessed demonstrations of thousands of people who protested against government corruption. The property of these people was looted by institutions affiliated with the Revolutionary Guards (IRGC) and other repressive organs. They rallied in the central streets of Tehran, and expressed their anger and disgust at the oppression of Iranian religious rule.

This shows that the people of Iran are ready for change. They do not want to be ruled by the mullahs. They want to have the same basic freedoms people enjoy in Europe. They expect European politicians to support them and to be on their side. So they really feel hurt when they see some European leaders having a warm relationship with Iranian regime’s officials. For example they wish Europe to black list IRGC and to condition their relations with Iran to a halt to executions.