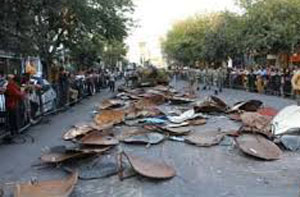 The Iranian regime’s Ministry of Intelligence and Security (MOIS) calimed on Sunday it has closed the sites of a number of foreign-based satellite channels for their involvement in ‘secret and illegal’ activities.

A statement by MOIS claimed the satellite TV channels are based in the US and Britain, had illegally established production bureaus in four provinces in Iran.

The sites were identified and closed and their crew have been arrested, it added.he ministry said the channels ‘worked in line with certain foreign intelligence services and served the interests of the global arrogance.’

The arrests comes as the Iranian regime has implemented an extensive plan for collecting satellite dishes and receivers in the country.

The Iranian regime has intensified its ban on satellite viewing across the country since Hassan Rouhani became the regime’s president one year ago.

Hassan Rouhani told the Council on Foreign Relations in New York September 26: “everyone in Iran has easy access to satellite networks, and you can even see dishes on the rooftops in every village.”

His words contradicted his actions that include more suppression and executions in Iran–some 800 have been executed during his 12 months in office.