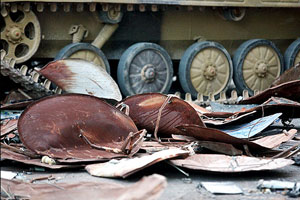 NCRI – It the latest attempt by officials to cut the country off from the outside world in the so-called ‘soft war’, a Revolutionary Guard (IRGC) commander said: “Citizens who hand over satellite receivers will receive a sum of money as appreciation and encouragement.”

Colonel Abedin Abbasi also said on Thursday this week: “Given that the enemy uses the tools of soft war, including satellite, to weaken our regime, all regime authorities should pave the way for the presence of basij to confront these conspiracies.”

Other regime’s officials are also repeatedly warning that satellite is ‘dangerous’, using phrases such as ‘satellite is the most important criminal tool’ and ‘satellite is like a chemical bomb and gas poisoning’.

The Iranian regime has applied various methods to prevent the use of satellite dishes over the past year. The last controversial method was destroying receivers and satellite dishes with tanks in the street.

Meanwhile, families in cities across the regime have been the victim of repeated attacks in which their dishes have been seized.

Despite a 1994 law making satellite dishes illegal, up to 70 per cent of families have them and their use is increasing, state-run TV network boss Fardin Ali-Khah said last year.

On June 1, 2014, Mr. Gholamreza Khosravi, a supporter of the People’s Mojahedin Organization of Iran (PMOI/MEK) was executed. He had been sentenced to death on the charge of Mohareb (enmity against God) for allegedly collecting information and giving monetary assistance to a Iran National Television – INTV (Simay-e Azadi) satellite television station.

But despite these suppressive measures, a recent report by the regime’s parliament research center concluded that ‘these measures have not achieved the desired result but have brought a craving for satellite use in the most distant and poorest villages and city suburbs’.

The report says people are using the satellite dishes ‘to access news and analysis’ and thus the ‘the motivation to watch satellite broadcasts still exists’.
It added: “Not adopting a fixed and specific approach has meant that not all measures adopted in this area have achieved the desired result.”