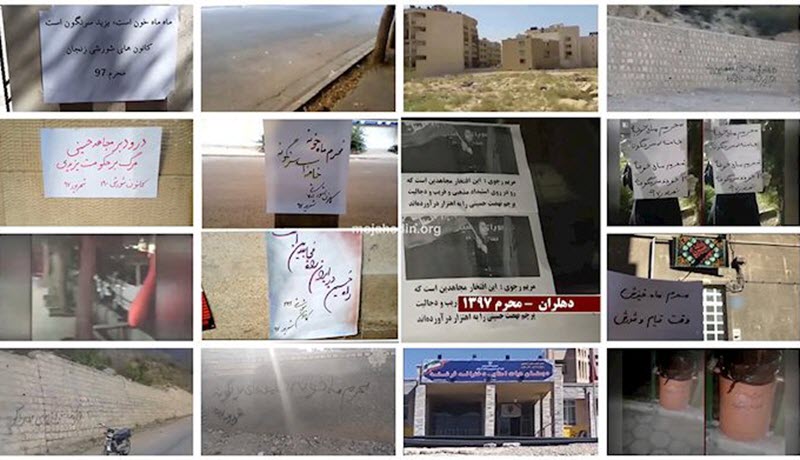 The main opposition to the Iranian regime, the People’s Mojahedin Organization of Iran (PMOI / MEK) and other associated groups are expanding their activities across Iran. Their calls for regime change are getting louder and louder despite the grave danger that they are putting themselves into. Dissidents and political opponents in Iran face the harshest of punishments. Not only do they risk arrest, torture, imprisonment and even execution, but the lives of their families are also at risk.

The regime has long considered being a member or supporter of the PMOI / MEK as being worthy of the death penalty. In the past, even people with loose affiliations to the PMOI / MEK have been executed.

In the following video, members of Resistance units in Tehran can be seen putting up posters in support of the opposition. The posters include the photo of Massoud Rajavi – the leader of the Iranian Resistance. They pledge to continue fighting against the clerical regime and declare that they are going to respond to fire with fire.

In the north-western part of the country, specifically in Zanjan, members of local resistance units also put up posters in which they promise to continue battling against the regime until it is finally overthrown. They too pledged to continue playing a role in the struggle.

In the following video, we can see posters in favour of the PMOI / MEK sitting on the windscreen of a number of cars in Iran’s capital city, Tehran. Many of the posters included messages saying that the Supreme Leader of Iran – Ayatollah Ali Khamenei – will one day be overthrown.

In Qazvin, in the north-western part of the country, more members of the Resistance movement have pointed out that the mullahs’ regime is using religion to preserve itself so that it can stay in power for longer.

In Tehran, members of a group called the Resistance Unit 777 were seen standing in a crowd proclaiming to continue the fight for freedom against the clerical regime.

Another tactic that has been used in the country is to put graffiti in the cities to spread the message of solidarity between members of the Resistance. In this video, members of certain Resistance units wrote slogans in graffiti across the city of Shiraz in the south-central part of the country.

The Resistance is tirelessly and selflessly working towards the greater good of freedom, democracy, equality and human rights for the people of Iran. The personal cost of their involvement is unimaginable to most people who have not lived under clerical rule.

Many members of the Resistance have personally experienced the violent oppression of the mullahs’ regime. Others have had family members or friends that have been killed or imprisoned in Iran. Others quite simply want to see an end to the clerical rule that is destroying the great country of Iran.

The people’s desire for change is great and if regime change could come from the will of the people alone, the regime would have toppled years ago.