December 24, 2015
Video clip and text of New Year and Christmas greetings by Maryam Rajavi, President-elect of the National Council of Resistance of Iran (NCRI):

Dear Christians in Iran and everywhere else,

Supporters of the Iranian Resistance across the world,

I would like to greet you on Christmas and the birth of Jesus Christ, which has coincided this year with the birthday of the Prophet Mohammad.

I would also like to extend my greetings for the New Year.

I wish that 2016 would be a year of unity and victory over Islamic extremism and especially the religious fascism ruling Iran and its evil allies in the Middle East who sow the seeds of enmity in the world.

We remember Jesus Christ when he said: “Love one another just as I love you”.

Also in the Quran, God says about Mohammad: “We sent thee as a Mercy for all mankind”.

This is the message of all divine religions and therefore, the coincidence of the two births, is a feast of brotherhood among all nations.

Fortunate are those who have found the essence of Christianity and Islam in love, compassion and freedom.

And we salute Virgin Mary, the symbol of love and sacrifice who is described in the Bible as “loved by God”.

The birth and emergence of every prophet mark a new birth for mankind in social life.

When our world is under the attack of terror and extremism, we can find the light of freedom and tolerance and perseverance against fundamentalism and extremism in these births.

Muslims and Christians can rely on their common values to stand up to those who pervert their religions. 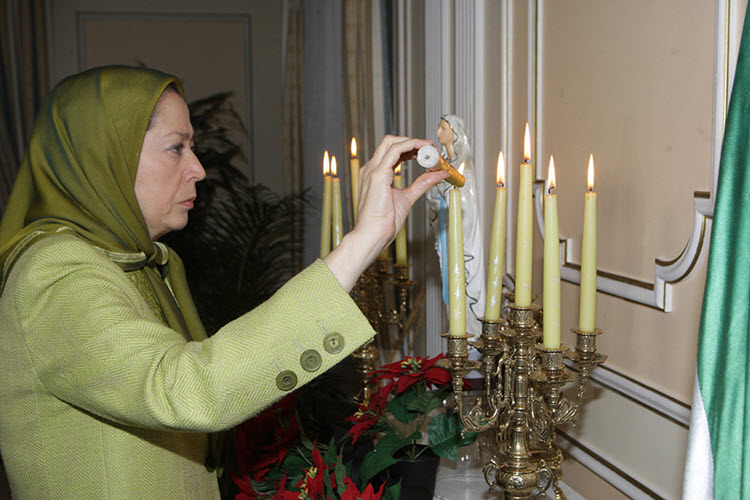 So, in contrast to what the extremists want, we should make our hope and faith in humanity deeper than ever.

Let us hope for a swift end to extremism and for the freedom of the people of Syria from dictatorships of Bashar Assad, Khamenei and Daesh terrorists.

Let us hope for end to displacement and homelessness of Christians throughout the Middle East.

And let us hope for the relief of converted Christians in Iran from the oppression of ruling mullahs and for freedom of the whole Iranian nation from this religious dictatorship.

On this occasion, I call on the world community to form an international front against the religious dictatorship in Iran and its proxies and militia in Syria and Iraq and to fight Islamic extremism, the enemy of true Muslims, Christians and all followers of other divine religions.

May the message of compassion, freedom and tolerance engulf the Middle East.

May the world get relieved from tyranny and fundamentalism and have a new birth and revival.

Merry Christmas and Happy New Year to you all.

Previous articleInterim session of the National Council of Resistance of Iran (NCRI)
Next articleMaryam Rajavi calls for global peace and fraternity, free of tyranny and fundamentalism