Iraq: Disturbing Confession by Hashd Al-Shaabi Commander Confirms It Is a Proxy of Iran 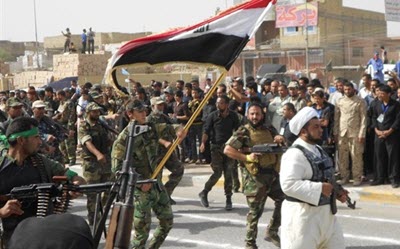 The shocking Confessions of Abu Mahdi al-Mohandes, commander of Iraq’s Hashd al-Shaabi forces, in a televised interview with a governmental Iranian television station – “Ofogh” (Horizon) on 1st April 2017, once again proves that Hashd al-Shaabi is a force comprised of militias linked to Iran’s Islamic Revolutionary Guards Corps (IRGC), whose officers are under the direct command of General Qasem Soleimani, commander of the terrorist Qods force, which in turn executes the orders of the Iranian regime’s supreme leader – Ali Khamenei in Iraq.

Abu Mahdi al-Mohandes, (Jamal Jafar Mahmoud Ibrahim), is one of the co-founders of the Dawa Party, led by the former Iraqi Prime Minister – the corrupt and viciously sectarian Nouri al-Maliki. Mohandes was sentenced to death for his participation in the bombing of the US and French embassies in Kuwait in 1983 and is wanted by Interpol. In 1984 he fled to Iran and became a member of the IRGC. After the Iran/Iraq War, he was responsible for the transfer and return of thousands of Iraqi agents of the IRGC from Iran to Iraq. He is one of the confidants of Maliki and was one of the candidates on his electoral list.

In an interview with “Ofogh” television he stated: “We have a very close relationship with Iran and the Islamic Republic, which we should be proud of,” regarding his relationship with Qasem Soleimani, he added: “Yes, I am proud to be a soldier of Haj Qassem. Being a soldier of Haj Qasim is an honor, it’s a blessing from God.” In response to the question: “Do you fight for Iran or Iraq?” he Answered: “Iran and Iraq, there is no contradiction between the two. Iran is our epicenter. We have no reservations in saying so.” In response to the question who does he like most in Iran he replied: “Clearly, Khamenei is not only Iranian, he belongs to us all and after him it would be Haj Qasem.” As commander of Iraq’s Hashd al-Shaabi, Abu Mahdi al-Mohandes admits in this interview that: “The most important commanders of Hashd al-shaabi are from the Badr Brigade”. Regarding the establishment of the Badr Brigade in Iran by the IRGC he states: “After going to Iran, immediately we joined the jihadi forces, which were named the Badr Brigade. Shahid Daghayeghi and Shahid Esmaeili (two IRGC commanders) launched the Badr Brigade. They were the founders of the Badr Brigade”

He confessed to taking part in the bombing of one of the Iranian opposition, PMOI/MEK bases in Basra named “Habib” in 2000 and stated: “The most important operation was the operation against the Habib base in which they said 13 were killed, but the building was practically completely destroyed”.

Abu Mahdi, who became a pawn of the IRGC in 1984, was the commander of the Badr Brigade for three years. His name was among the list of 32,000 agents on the payroll of the Qods force, which was revealed by the NCRI ten years ago. He was identified with the serial number 3829770 and his bank account number is registered as 50100460275.

In 2005, after the discovery of the Jaderyeh torture chambers by US forces in Baghdad, it became evident that Abu Mahdi al-Mohandes and a number of other IRGC officers were running the facility and they had tortured and killed former Iraqi army officers.

The European Iraqi Freedom Association (EIFA) calls on the US government and the EU to make all future aid to Iraq conditional on the dissolution of the Hashd al-Shaabi militias and to put  Abu Mahdi al-Mohandes and other pawns of the IRGC and its extra-territorial wing – the Qods force  in the international terrorists lists. They are mere tools for the domination of the Iranian regime in Iraq.

Previous articleIran: An Executioner and a Charlatan, Two Main Candidates in the Mullahs’ Presidential Election
Next articleSituation in Syria Will Not Improve Until Iran Regime Is Expelled From the Country