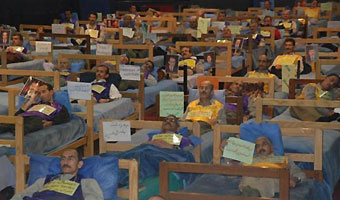 The hunger strike began after the massacre of 52 members of the People’s Mojahedin organization of Iran (PMOI MEK) by Iraqi forces on September 1.

Many of those who have now refused food for seven weeks are in a critical physical condition, suffering from fainting, failing eyesight and heart and digestive problems.

Iranians in Rome, Stockholm, Geneva, London, Berlin, Ottawa and Melbourne have also all refused food since the Ashraf atrocity.

The hunger strikers are also demanding that the US and UN deploy Blue Helmets peace-keeping troops to protect the residents of Camp Liberty in Iraq.

The seven hostages were abducted from the camp during the slaughter, during which many of the 52 victims were shot in the head while handcuffed.

They are being held in Iraq and now risk being deported to Iran where face interrogation, torture and execution.

Meanwhile, Amnesty International issued an Urgent Action on Tuesday declaring: “The seven Iranian exiles abducted on 1 September are now known to be held by the Iraqi security forces at an unofficial detention facility in central Baghdad. They are at risk of torture and other ill-treatment and could be forcibly returned to Iran.”

The statement said: “According to reliable sources, the seven were transferred under tight security to an unofficial detention facility in the former al-Muthanna airport in central Baghdad at the end of September. The seven remain under investigation.”

“The seven Iranian exiles were abducted on 1 September 2013 from Camp Ashraf, about 60km north-east of Baghdad in Diyala governorate, when armed men raided the camp and shot and killed 52 residents. Video footage and photographs showed that many of the 52 had been shot in the head, some while handcuffed. Eyewitnesses from the camp said they had seen the seven people in handcuffs, being beaten, thrown to the ground and then taken away in a white minibus.”

Amnesty International’s Urgent Action urges calling on the Iraqi authorities to release the seven Camp Ashraf residents and to immediately disclose their whereabouts and ensure that the seven people are protected from torture and other ill-treatment and have access to a lawyer of their own choosing.