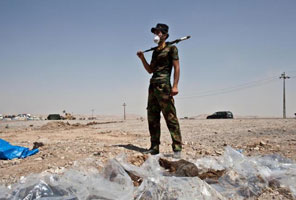 Shiite militias backed by the Iraqi army are committing war crimes against civilians and use the battle against ISIS as a pretext for carrying out “revenge” attacks on members of the Sunni community, Amnesty International said Tuesday.

Amnesty International said: “The growing power of Shiite militias has contributed to an overall deterioration in security and an atmosphere of lawlessness,” and called on the government of Prime Minister Haidar al-Abadi to rein in the scores of militias targeting civilians across Iraq.

The rights watchdog accused the Baghdad government of supporting and arming groups of Shiite fighters who “are ruthlessly targeting Sunni civilians on a sectarian basis under the guise of fighting terrorism”.

“By granting its blessing to militias who routinely commit such abhorrent abuses, the Iraqi government is sanctioning war crimes and fuelling a dangerous cycle of sectarian violence that is tearing the country apart,” said Donatella Rovera, Amnesty International’s senior crisis response adviser.

Amnesty said it had seen evidence of “scores” of “deliberate execution style killings” against Sunnis across Iraq as well as Sunni families having to pay tens of thousands of dollars to free abducted relatives.
Many of those kidnapped are still missing and some were killed even after their families paid hefty ransoms to secure their release, the group said in a report.

The watchdog also accused Iraqi government forces of serious rights violations, including evidence of “torture and ill-treatment of detainees, as well as deaths in custody” of inmates held on terror charges.
“Successive Iraqi governments have displayed a callous disregard for fundamental human rights principles,” Rovera said.

“The new government must now change course and put in place effective mechanisms to investigate abuses.”