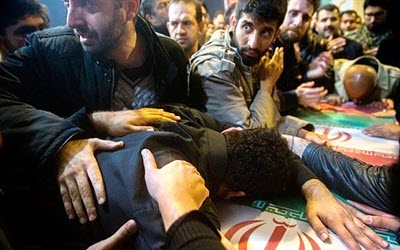 NCRI – After a large number of the Iranian regime’s Revolutionary Guards (IRGC) and the regime’s foreign mercenaries were killed or wounded near Aleppo, Syria on May 6, the Iranian regime has stopped dispatching forces from Mazandaran Province to Syria and Iraq, out of fear of protests. Mazandaran was reportedly the point of origin for most of the Revolutionary Guards killed in the latest fighting near Aleppo.

According to the Basij News Agency, run by the paramilitary Basij, during a ceremony in the city of Sari on Sunday, May 15, Mullah Kazemi announced: “Given the martyrdom of 13 fighters from Mazandaran in Syria, it has been decided that transfer of forces from Mazandaran to warfronts in Syria and Iraq be stopped.”

In this same ceremony, Mullah Joshaqani referred to the interference of countries in the region and the threat of the downfall of the regime ruling Iran and said: “If we are not present in Syria and Iraq, then we have to fight the elements of world arrogance on our 1400 kilometer border.”

Tasnim News Agency, affiliated to the IRGC Quds Force, had reported on May 6 that thirteen Revolutionary Guards were killed in Khan Touman, near Aleppo, and that they were from Mazandaran Province.

Other sate-run news agencies reported 80 casualties from the Revolutionary Guards and Iranian regime’s foreign mercenaries in Syria on that day.

According to reports from inside Iran, many families of those killed in Syria made calls, sent emails, or went in person to the IRGC office in Mazandaran to protest the dispatch of their children to Syria. In particular, many families accused the IRGC and the government of deceiving people about the nature of the mission, saying that Iranian fighters would be defending Shiite holy shrines when in fact they were undertaking offensive operations near Aleppo.

The National Council of Resistance of Iran (NCRI) issued a statement on May 10 saying, “The ever-increasing presence and unprecedented casualties of the Iranian regime’s Revolutionary Guards (IRGC) and mercenary militias in Syria demonstrate well that the main issue and the source of the crisis in Syria are the criminal ruling mullahs in Iran who have tied the fate of their regime to that of Syria and despite consecutive losses and coffins arriving in various cities of Iran dispatch even more IRGC and mercenaries to Syria, which for them has become such a lethal quagmire.”

It added: “Incidents of the last few days in Syria and the presence and extensive casualties of the Revolutionary Guards in the country as well as statements of the regime’s leaders show well that confronting the clerical regime in Syria and eviction of the IRGC from there is the first and the most important step in resolving the crisis in Syria and the whole region.”

On Wednesday, the International Committee in Search of Justice released a statement that decried European silence over the recent conviction, in a Belgian court,...
Read more
Latest News on Iranian Terrorism

On Wednesday a letter was published by the clerical regime's former operative in Albania. The letter was written by Hadi Sani-Khani to United Nations...
Read more