IRGC: Its Role and Its Aims 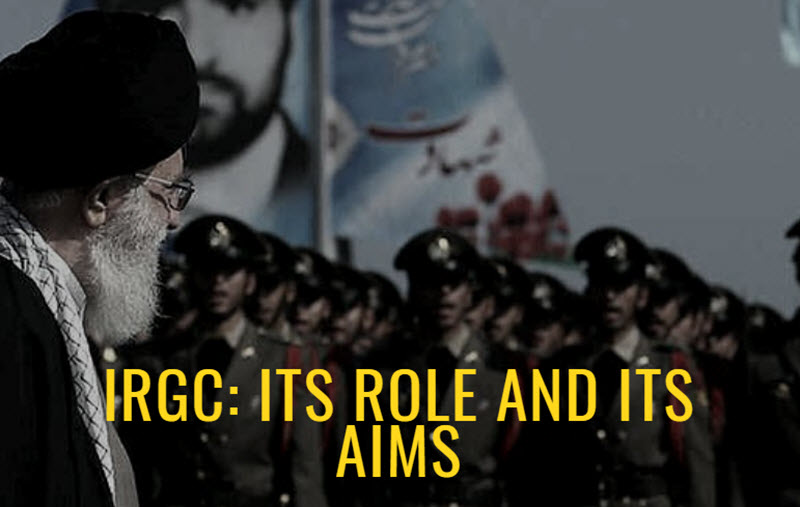 The notorious Islamic Revolutionary Guard Corps (IRGC) plays a major role in the running of Iran. It was set up just three months after the 1979 revolution. It was initially intended to be a paramilitary force that was loyal to the country’s Supreme Leader but it has become the most important force that holds the regime up.

The power that it holds its more than any other force and it reports directly to the Supreme Leader. Some have said that the IRGC is a “shadow government” of the country. It is certainly not an inaccurate description and it must be noted that the URGC is accountable to no one other than Supreme Leader Ali Khamenei.

Over the years, it has played a pivotal role in the suppression of the people. The founder of the Islamic Republic – Ruhollah Khomeini – knew that he would need to have some sort of backup and support in order to deal with any domestic turbulence. He needed something that was separate to the country’s official military and police.

Dissidents, from the very start, were targeted. This did not just include opposition groups and figures, but also journalists, intellectuals and unions.

As well as being involved with targeting the domestic dissent (the 1988 massacre in which more than 30,000 political prisoners were executed), the IRGC launched campaigns aimed at dissidents abroad. The IRGC also took part in the crushing of the 1999 student uprisings and it played a role in the “chain murders” of the nineties. During the 2009 uprising, the IRGC arrested thousands, executed scores of people, and tortured hundreds more.

The IRGC’s extraterritorial unit, the Quds Force, carries out missions outside Iran. The regime meddles in the affairs of its neighbours in the region and the IRGC has now set up training camps at home and abroad so that it can train its proxy groups.
The IRGC has a huge budget and it spends a significant portion of it on carrying out military attacks and spreading its influence. There are more than a dozen different countries that have been victim to the IRGC’s cultural influencing and its takeover of power following the establishment of cultural centres.

Since the Iran-Iraq war, the IRGC has been attempting to take full control over the country’s economy. It already has significant control over a large portion of it. The oil, gas and construction sectors include many front companies in which the IRGC is affiliated. The use of front companies is common because it facilitates the bypassing of sanctions.

Since the 2015 nuclear deal was signed, almost 110 agreements have been made with Iran. Ninety of them are with IRGC-affiliated companies. The deals total more than $80 billion.

The current role of the IRGC is to prop the clerical regime up and to protect it. It supports terrorist activities and spreads a fundamentalist ideology that is criminal and dangerous. It is one of the biggest problems when it comes to the Iran threat and it must be recognised as such.