IRGC Must Be Designated as Terrorist Entity 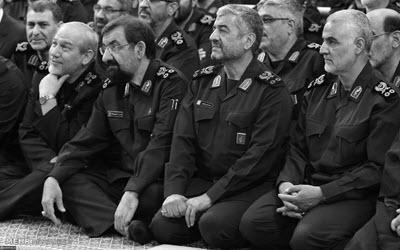 The White House announcement that it has asked several US agencies to consider designation of the Islamic Revolutionary Guards (IRGC) as a terrorist organization has sent a shock wave through the well-established appeasers in Washington. The list of their arguments opposing the IRGC designation is very telling. A collection of these arguments can be found in a February 8 article in the Washington Post, attributed to unnamed officials and titled, “Defense, intelligence officials caution White House on terrorist designation for Iran’s Revolutionary Guards”.

Almost identical arguments were made by the discredited Tehran lobby, NIAC, immediately after the announcement by the White House. They appeared in statement titled, “Trump’s Reckless New Iran Provocation: Designating the IRGC.”

The core argument of the unnamed sources in the Post is that “to designate Iran’s Revolutionary Guard Corps as a foreign terrorist organization could endanger U.S. troops in Iraq”. NIAC made the same argument by saying, “U.S. personnel remain on the ground in Iraq and an FTO designation could pose significant threats to U.S. soldiers on the front lines against ISIS forces.” Simply put, they argue that if the IRGC is designated, it or its proxies would resort to terrorism against US troops, endangering American lives.

It is further argued that designation would undermine the fight against ISIS. In order to justify this bizarre argument, it is suggested that IRGC designation could undermine cooperation between US forces and the IRGC and its proxies. This argument is the de facto acknowledgment of something which the Obama Administration consistently denied when criticized for its conciliatory policies on Iran.

As always, Tehran’s lobby also make the now-well-exposed argument that designating the IRGC will lead to war. This claim is nothing but an attempt to intimidate the critics of the policy of appeasement and to serve the interests of the mullahs’ regime.

It is also argued that IRGC is a state institution, even being compared to the regular army, and thus should not be designated in the same way as non-governmental organizations.

Finally, Tehran’s apologists and lobbyists are pursuing the outdated argument that a firm policy on Iran would actually serve the hard-liners.
All these arguments are misguided and constitute an attempt to maintain the old, failed policy of appeasing the clerical regime. Here are just a few reasons why designating the IRGC is the right policy and why doing so is indeed necessary:

1. IRGC is a terrorist entity and thus qualifies for being designated. No one can argue against this fact. The IRGC has been and continues to be engaged in terrorism. It is responsible for various terrorist operations in Lebanon, Iraq, Syria and other countries of the region. Far more, it has committed war crimes and crimes against humanity in Syria. According to the US State Department, “The IRGC-QF is the regime’s primary mechanism for cultivating and supporting terrorists abroad.” The 2015 State Department Country Report states that “(IRGC-QF), continued to transfer arms to Hizballah” and that “in late November, Kenyan security agencies announced that they had arrested two Iranian citizens [planning] to execute a terrorist attack.”

Paramilitary groups in Iraq affiliated with the IRGC are engaged in terrorism and crimes against humanity. The U.S. State Department declared Kataib Hezbollah a “terrorist organization in 2009, blaming the group for attacks on U.S. forces. Its leader, a known terrorist, is known by the nom de guerre Abu Mahdi al-Mohandes and began working with the Iranian Revolutionary Guard Corps in Kuwait in the 1980s and was responsible for the bombing of US Embassy there. He currently reports directly to Quds Force commander, Qasem Soleimani.

Another terrorist group directed by IRGC-Quds Force is Asaib Ahl al-Haq. According to the U.S. military, the group’s leader, Sheik Qais al-Khazali, oversaw operations that included an attack that killed five U.S. soldiers in Karbala in 2007… Al-Khazali also reportedly organized the kidnapping of five British men in Iraq in 2007.

Ahmad Vahidi one of the first commanders of the IRGC Quds Force is wanted by Interpol for participation in the 1994 terrorist attack in Buenos Aires. He was also personally involved in the Kobar Tower terrorist attack that 19 US servicemen in 1996.

2. The argument that an IRGC terrorist designation would endanger US personnel in the region is itself an admission that the IRGC is a terrorist organization. It implies that public acknowledgment of that fact would lead to retaliation in the form of terrorist attacks on US forces in Iraq or elsewhere. But past experience has proved beyond any doubt that making concessions would further embolden the mullahs’ regime and IRGC to conduct more terrorist attacks as they see it as sign of weakness. Such policy is a de facto invitation to the IRGC and other terrorist groups, implying that the US government can be blackmailed by threat of terrorist acts. Past experience also indicates that the mullahs fully understand the language of firmness. Therefore, a firm policy is absolutely necessary.

3. The claim that designating the IRGC would undermine fighting ISIS is so ridiculous that it can only be understood as pure deception. The IRGC and the Iranian regime are not fighting ISIS. On the contrary, they are responsible, through their puppet governments in Syria and Iraq, for the creation and emergence of ISIS.

This fact has been well-established. John Kerry, former secretary of state, said in November 2015 that ISIS “was created by Assad” and by former Iraqi Prime Minister Nouri al-Maliki, both of whom released al Qaeda prisoners in their respective countries. Both Assad and Maliki acted at the behest of Iranian regime.
Kerry added, “Make no mistake: Assad has cut his own deal with Daesh. They sell oil. He buys oil. They are symbiotic, not real enemies in this.” Therefore, the argument that designating the IRGC would undermine fighting ISIS is pure fantasy.

Indeed, designating the IRGC would strengthen the war on ISIS. It would send the message to the disaffected Sunnis that the US is no longer on the side of the Iranian regime and its militias, whose sectarian policies and atrocities against Sunnis laid the groundwork for ISIS.

4. Contrary to the argument raised by the appeasers, failing to designate the IRGC and failing to have a firm policy vis-à-vis the clerical regime has already resulted in a devastating war, where hundreds of thousands of innocent civilians in Syria have been killed by Assad’s army, supported by the IRGC. In addition, such a policy is likely to make a more devastating war inevitable. Tehran’s lobby is not concerned about war, as it has never said a word about the role of the IRGC in the war crimes committed in Syria or Iraq. Their concern is purely to preserve the religious dictatorship in Iran. Therefore, anyone who genuinely desires peace must call for curbing the force that is responsible both for hundreds of terrorist acts in the region and for a sectarian policy that has already left hundreds of thousands dead and millions displaced.

5. The argument that the IRGC, despite its undeniable acts of terrorism, should be spared from designation because it is a state institute or state Army has no legal basis. But more important, the IRGC is not a national army; its true mandate is export of terrorism. In fact, Brigadier General Ahmad Gholampour, an IRGC commander describes it as follows: “The mandate of the Army is to defend the country’s border and its geographic jurisdiction is Iran. But Islamic Revolutionary Guards Corps does not have the extension of ‘Iran’. That means its mandate is to defend the Islamic Revolution and its achievements without border… IRGC is tasked to engage in any issue that it feels may endanger the revolution. We have free hands in engaging in any geographic location, in any political, social and cultural issue.” (Fars News Agency, October 6, 2016) Furthermore, the Quds Force is officially “the extraterritorial” branch of the IRGC. Both the mandate and the actual conduct of the IRGC make it well qualified to be designated as FTO.
6. The narrative of hard-liners vs. moderates is a familiar illusion that has been advocated by the appeasers for more than three decades. The problem with it is that “moderates” do not exist in the regime. More importantly, the system of absolute rule of jurisprudence (Velayat-e Faqhi) is incapable of reform from within. Therefore, this argument is simply a cover to justify making concessions to the mullahs’ regime.