Italian Parliament’s Call, for Establishment of an Independent International Committee to Investigate the 1988 Massacre in Iran 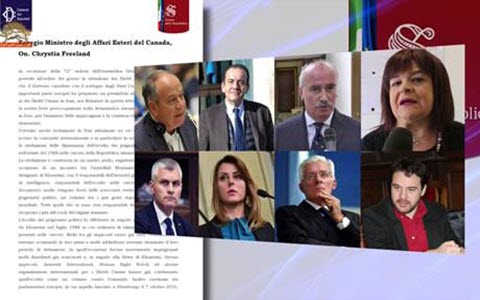 NCRI – The seventy second session of the U.N. General Assembly, will review the Human Rights situation in couple of countries including Iran according to its agenda.

The Canadian government supported by U.S .and an EU country، have already prepared a draft for a resolution on the situation of the Human Rights in Iran.

On this occasion a number of Italian parliamentarians, in a call condemned the catastrophic situation of human rights in Iran and the increase of executions, they also called for the establishment of an independent investigation committee for the 1988 massacre of 30000 political prisoners in Iran.

The following is the full text of this letter:

Dear Minister of Foreign Affairs of Canada, H.E. Chrystia Freeland,
On the occasion of the 72nd session of the UN General Assembly, that has on its agenda the situation of human rights in Iran, since the Canadian Government prepared a preamble to the resolution on Human Rights in Iran with the support of the USA and of some of the most important European countries, we, the signatory parties of this letter, want to express our strong concern for the tragic situation of human rights in Iran, for the increase in the number of hangings and for the perpetrated violations of the most basic human rights.
Moreover, we want to address your attention toward the revelation on the extent of the massacre of political prisoners in the prisons of the Islamic Republic during the summer of 1988, which has shaken the international community and, in particular way, the Iranian society.

The revelation was found on an audio tape recorded on August 15th, 1988 during a meeting between the ayatollah Montazeri, designated successor of Khomeini, and four representatives of the judicial authorities and of the secret services responsible for the massacre in the prisons of Tehran.

The tape reveals shocking truths on the elimination of political prisoners, one of the most heinous crimes after the 2nd World War. All the ones responsible for this terrible crime are now serving in the highest positions of the Iranian regime.
The killings of the political prisoners started after Khomeini’s declaration of a fatwa in July 1988, which ordered to eliminate all the dissidents in the prisons. Several among those executed had already been “condemned” and were already serving the sentence or had concluded their detention period. Following the fatwa of Khomeini, many dissidents previously released from prison were newly detained and then hanged. Amnesty International, Human Rights Watch and some other international organization for human rights have already condemned the massacre as a crime against humanity. Moreover, hundreds of European MPs defined it a crime against humanity in an appeal sent to Strasbourg on 7th October 2016 and they requested to “the UN High Commissioner on Human Rights, to the Council on Human rights, to the UN General Assembly and to the UN Security Council to urgently set up an international committee to investigate on the genocide of 1988”.
The UN Special Rapporteur on the state of Human Rights in Iran wrote in a report (A/72/332) released on 14th August 2017 to the UN Secretary General Antonio Guterres that “several reports testify that after 1988 thousands of people have been hanged and their relatives have the right to know the truth about the genocide and the fate of their beloved ones”.
The Iranian regime must put an end to the violations of Human Rights. For this reason, we ask you to put in place all the necessary actions to set up an independent international committee to investigate on the massacre of political prisoners in the Iranian prisons during the summer of 1988.

the Canadian Ambassador to the United Nations, Mr Marc-André Blanchard

the United States Ambassador to the United Nations, Nikki Haley

Renata Bueno, member of the foreign affairs and human rights committees of the parliament

Mariano Rabino. member of the foreign affairs and human rights committees of the parliament

Mr. Roberto Rampi member of the human rights committee of the parliament

Previous articleThe Belgian Lawmakers, Condemned the Human Rights Violations in Iran
Next articleThe Need for Regime Change in Iran by the Iranian People