John Bolton: US policy should be regime change in Iran 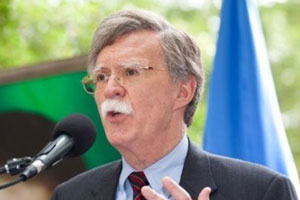 To a large rally of anti-Iranian regime supporters outside the United Nations, a US Ambassador said that the leaders of the Iranian regime are not representing the Iranian people and called for a US policy of the regime change in Iran.

Former US Ambassador to the United Nations, John Bolton said he would like to see the US Administration adopt the policy that, “…the only real solution in Iran is overthrowing this regime and giving the government back to the people…and our government should be providing assistance to the opposition to the ayatollahs. We should of started this decades ago, but never too late to start,” he said.

Ambassador Bolton told the supporters of the Iranian opposition, the People’s Mojahedin Organization of Iran (PMOI/MEK) on September 25 that the Iranian regime does not represent its citizens, and violations of human rights has increased in the last year since Hassan Rouhani came to power.

He mentioned the atrocities occurring at Camp Liberty in Iraq towards the Iranian political refugees.

“It’s important to explain…that this isn’t a recreation camp. The conditions are unacceptable. The restraints just on basic human needs that the Iraqi government imposes on the people at Camp Liberty is a disgrace,” he said.

Bolton referred to the promises made by the US government to protect residents of Camp Liberty, saying it’s a “dishonour” not to keep its word, and equally for the United Nations to ignore them.

In the US operation to destroy ISIS, Bolton said US efforts to find an ally in the Iranian government is wrong. “This is something we have to fight against…the ayatollahs in Iran and their support for international terrorism and their nuclear weapons program remain the principle threat both to international peace and security, and to their own citizens in Iran,” he said. In any strategy to annihilate ISIS, he stressed the importance of not increasing the strength of the regimes in Iran and Syria.

On the topic of nuclear negotiations between the UN Security Council and Iran, Bolton said there is a “grave danger” about making concessions on their program. He said information leaks indicate a “proposal deal gets worse, and worse, and worse…it will have the profound impact of allowing control over the enrichment program to remain with the ayatollahs. Here’s what our objective should be, that the regime in Tehran should have no uranium enrichment at all.”