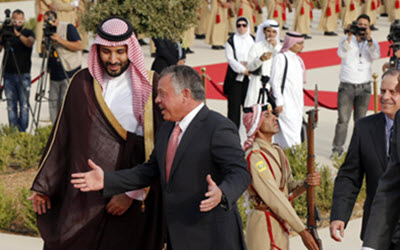 After the arrival of Saudi Arabia’s deputy crown prince to Jordan on Monday, both Riyadh and Amman said in a joint statement that they reject the Iranian regime’s “interference” in the region, Al Arabiya News Channel reported.

Earlier this month it was reported that the Iranian regime’s embassy in Riyadh was involved in a plot to recruit 200 dissidents in Saudi Arabia to launch operations that would undermine the country’s security, including spying for Tehran.

Saudi Foreign Minister Adel al-Jubeir announced in January that the kingdom had halted trade and flights with Iran’s regime as part of a diplomatic response to Iranian protesters storming the Saudi Embassy in Tehran.