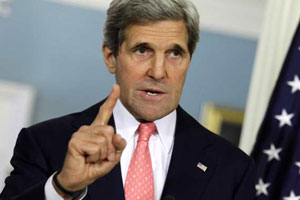 The United States strongly condemns today’s brutal, senseless terrorist attack on Camp Hurriya that killed and injured camp residents. Our condolences go out to the families of the victims, and we hope for the swift recovery of those injured.

We have been in touch with senior Iraqi officials to ensure that the Government of Iraq renders all possible medical and emergency assistance to the victims. We also urge the Government of Iraq to provide additional security for the camp’s residents and to find the perpetrators and hold them accountable for the attack, consistent with its obligations under the December 25, 2011 agreement with the United Nations.

We are consulting with the Government of Iraq to ascertain the full extent of this unprovoked attack.

No matter the circumstances, on this point we remain absolute: the United States remains committed to assisting the UN High Commissioner for Refugees in the relocation of all Camp Hurriya residents to a permanent and safe location outside of Iraq. We call on more countries to assist in responding to this urgent humanitarian situation by welcoming camp residents for relocation and by contributing to the fund established by the United Nations to support their resettlement. The Department, through its Senior Advisor for MEK Resettlement, will remain actively engaged in the international effort to relocate the residents of Camp Hurriya to safe, permanent locations as soon as possible.