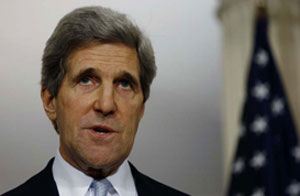 NUSA DUA, Indonesia: (AFP) – US Secretary of State John Kerry on Monday urged Iran to come up with new nuclear proposals, rebuffing Tehran’s position that the onus is now on foreign powers to unblock the long-running impasse.

Iran’s Foreign Minister Mohammad Javad Zarif said Sunday that the previous foreign offer, made by the “P5+1” group at two meetings in the Kazakh capital of Almaty before the June election of moderate President Hassan Rouhani, was no longer valid.

But Kerry, while welcoming recent overtures including a historic contact between Rouhani and US President Barack Obama, said the ball remained in Iran’s court.

“The group of six put a proposal on the table at Almaty and I don’t believe as of yet Iran has fully responded to that particular proposal. So I think we are waiting for the fullness of the Iranian difference in their approach now,” he told reporters in Indonesia after meeting Russian Foreign Minister Sergei Lavrov.

“So what we need are a set of proposals from Iran that will fully disclose how they will show the world that their programme is peaceful.”

Western powers and Israel have long accused Iran of seeking to develop nuclear bombs in the guise of a civilian programme, charges Tehran has always vehemently denied

The proposals made in Almaty required Iran to suspend uranium enrichment at the 20 percent level it says it needs for a medical research reactor, and to halt enrichment at its underground plant at Fordo near the central city of Qom.

EU foreign policy chief Catherine Ashton, who represents the six powers in the talks, said last month that she was still waiting for Iran’s response to those previous proposals.