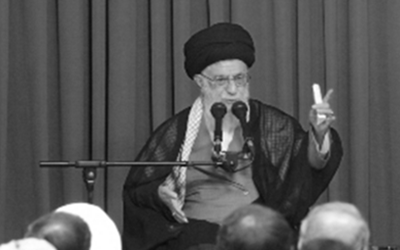 NCRI – The Iranian regime’s Supreme Leader Ali Khamenei has expressed concern that social and ethnic rifts will turn into an “earthquake” for his regime.

“The enemy is trying to make active the ethnic, politico-religious and factional rifts and to trigger an earthquake, therefore lawmakers must strive to prevent this plot of the enemy from succeeding,” Khamenei told members of the regime’s Majlis, or Parliament, on Sunday.

While alluding to growing factional feuding and schisms within the regime, Khamenei said “Lawmakers can vote based on their political outlook and they can support or criticize an issue but this must in no way lead to divisions, verbal confrontations, threats or conflicts as was the case in previous periods of the Majlis.”

Khamenei pointed out that factional feuding within the Majlis risked spilling over into society, bringing about tension and a negative atmosphere.

The mullahs’ supreme leader also expressed concern about the economic stagnation in Iran, saying: “The country is in a special situation.”

He described Iran’s economic crisis as an “urgent and pressing issue.”

In 2009, millions of Iranians took part in a nationwide uprising against the mullahs’ regime which lasted nearly eight months. Since then, Khamenei’s number one red line has been for another uprising to erupt, stemming from the socio-economic crises in the country.

The epicentere of Iran’s coronavirus crisis is now besieged by floods, with many vehicles swept away and many factories and stores filled with muddy water. The...
Read more
News: Society

As the coronavirus pandemic continues to claim more lives in Iran, in another inhumane measure the Iranian regime has started to fire medical staff or leave them...
Read more
Search