Largest rally in protest to Ahmadinejad’s presence in UN

Thousands of Iranian-Americans rallied in New York on Wednesday, September 14, against Mahmoud Ahmadinejad, Iranian regime’s new terrorist president. The event was widely reported by international media and the following are excerpts:

Associated Press, September 15 – … The protestors claimed that President Ahmadinejad had ordered the execution of thousands of political prisoners and was a major figure in the assassination of Iranian dissidents abroad. 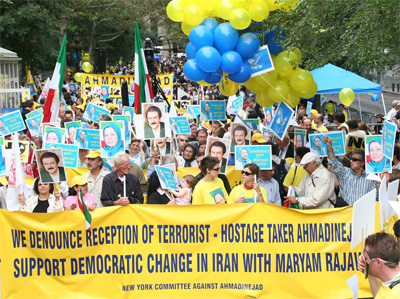 Thousands of Iranian-Americans rallied in New York on Wednesday, September 14, against Mahmoud Ahmadinejad, Iranian regime’s new terrorist president. The event was widely reported by international media and the following are excerpts:

Associated Press, September 15 – … The protestors claimed that President Ahmadinejad had ordered the execution of thousands of political prisoners and was a major figure in the assassination of Iranian dissidents abroad.

The protestors voiced their support for Maryam Rajavi, the President-elect of the National Council of Resistance of Iran (NCRI).

Spokesperson for the New York Committee against Ahmadinejad, Shirin Nariman, said if the President stays in power, terrorism will continue to grow.

The group also called for multi-faceted sanctions against Ahmadinejad and his government.

While the Iranian rally was the largest in Dag Hammersjold Plaza, other protests were also staged. Some protestors gathered to demand freedom for Kurdistan and Burma.

A few city blocks away, a protest was held outside the Iranian Mission to the UN. It was attended by former Americans who were taken hostage in Iran in 1979.

They would like to see Iran reprimanded and would also like hostages to be financially compensated. The protesters described Iran as a terrorist state, led by a terrorist president.

CBS News,  September 14 – … When Ahmadinejad was granted a visa to enter the United States in order to attend the U.N. summit, many Iranian-Americans were outraged. A group of them came together to form the New York Committee Against Ahmadinejad (NYCA).

“We decided to form this community to oppose his presence in the aftermath of the anniversary of Sept. 11,” NYCA spokesperson Shirin Nariman said.

In his speech at the U.N., Mr. Bush said, "We must send a clear message to the rulers of outlaw regimes that sponsor terror and pursue weapons of mass murder: You will not be allowed to threaten the peace and stability of the world."

Although he did not mention Iran by name, Mr. Bush has harshly criticized the Iranian government in the past. In an interview for Israeli television last month, he said "all options are on the table" if Iran refuses to comply with international demands to halt its nuclear program.

To Hoorah Mostashari, an Iranian-American who attended the protest, Ahmadinejad’s presence in New York had a visceral effect. Mostashari was so outraged that she traveled all the way from California to attend the protest, she said. Mostashari garnered up painful memories of what she said happened to her when she returned to Iran in 1981, after having left the country at the age of 15 to go to the United States.

Mostashari recalled the day when she said Iranian soldiers showed up at her door, giving her cause to regret her decision to return home. It had only been two years since the Islamic Revolution of 1979, and anti-American sentiments were running high. Mostashari was afraid.

Having just returned from the belly of the Great Satan itself, where she studied at UCLA, Mostashari had every reason to believe that she would fall under the fundamentalist regime’s suspicion. She had the foresight to bury her collection of opposition newspapers in the ground, and when the soldiers came, she said she provided them with a false identity, claiming that she was her sister. Her quick thinking might have saved her life.

”They would have killed me,” she said. “I had to lie, in fear of persecution.”

After her close call with the Ayatollah’s forces, Mostashari said that she fled Iran again and returned to the United States, where she has lived ever since. She now owns a cigar and wine shop in southern California. Still afraid of the repercussions she might face from the Iranian government, she said that she has not returned to the country in which she was born, where she has family that she has not seen in 24 years.

Mostashari agreed with the American State Department that President Ahmadinejad is a terrorist, and she was outraged that he was allowed to enter the United States to speak in front of the General Assembly.

Many protestors asserted that the Iranian president was one of the students who took 66 Americans hostage in Tehran in 1979. But an internal government review found that there is no conclusive evidence to suggest that he was closely involved in the takeover. Ahmadinejad has denied that he took part in targeting the American Embassy.

"I believed that if we did that, the world would swallow us," he said, according to an aide, Meisan Rowhani.

Lynn Smith Derbyshire, an American woman who spoke at the protest, lost her brother in October of 1983, when he was killed along with 240 other U.S. marines in a terrorist strike on his military barracks in Beirut, Lebanon. In 2003, A U.S. District Court judge ruled that Iran had sponsored the attack and had directed the terrorist group Hezbollah to carry it out, but Derbyshire and other victims’ family members have still not received compensation.

Although Ahmadinejad has not been accused of having a direct role in the Beirut bombing, Derbyshire is appalled that the Iranian president was allowed to appear at the U.N.

“I think that he should not be here at the invitation of the U.N. He should be here to stand trial for his crimes,” she said.

The protest had a festive atmosphere, with Iranian-Americans joining political activists who came from as far away as Denmark to show solidarity. They danced and sang amid a sea of blue and yellow balloons and confetti.

“The rally calls for a firm and resolute policy by the U.S. and the international community in the face of the growing threat of the Iranian regime,” the NYCA stated in its policy goals. “This policy must reject both appeasement and foreign war in favor of support for Iranian people and organized resistance.”

A diverse slate of speakers took the podium and addressed the ebullient audience, ranging from NYCA representatives to former New York Fire Commissioner Thomas Von Essen. The speakers and protestors were united by their anger with the Iranian regime and frustration with the world for not doing enough to quell it.

“Oh, Washington. Does the phrase, ‘We stand for democracy in the Middle East’ have real meaning, or was it just a political slogan?” Rabbi Daniel M. Zucker, one of several religious leaders who addressed the crowd, asked.

While Mostashari said that she and her countrymen have endured a lot, her optimism for the future is what keeps her active in the cause of promoting Iranian freedom. She offered some advice that she hoped world leaders would consider, as they convened at the U.N.

“The hope is for the entire world to stop economic dealings with the Iranian government,” Mostashari said. “If they just stop buying oil, [the regime] will collapse.”