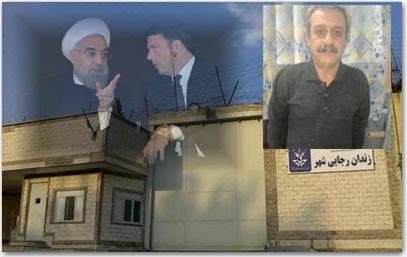 NCRI – The following is the English translation of a letter of protest by Iranian political prisoner Reza Akbari Monfared to the Prime Minister of Italy over his planned trip to Iran.

Mr. Akbari Monfared has written the letter from Iran’s notorious Gohardasht Prison in Karaj, north-west of Tehran, to Prime Minister Matteo Renzi reiterating that the Italian Premier’s trip to Tehran on Tuesday would only embolden the mullahs’ regime to commit more crimes.

To: Mr. Matteo Renzi, the Prime Minister of Italy

I came to know that you are traveling to Iran. As a prisoner, I am burdened with a duty to address some issues and discuss them with you. I have been sentenced to five and a half years in prison and it is now 39 months that I am serving in prison because of the fact that I only twice had a telephone conversation with my brother. Do you really intend to meet with a regime that has been denounced 36 times in the General Assembly of the United Nation for violation of human rights? This ruthless and inevitable regime has martyred four members of my family for supporting the People’s Mujahedin of Iran (PMOI /MEK) without giving them a chance to be tried or to have access to a lawyer. As you already know, this regime has set the whole region on fire and given its very nature cannot and will not engage with the world. Words of “moderation” and “balance” ring hollow and are empty slogans.

Prime Minister, in the current presidency of Hassan Rouhani, over 2300 people have been executed. By coming to Iran, you will only give legitimacy to this regime to commit more crimes.

The National Council of Resistance of Iran (NCRI) in a statement last week urged Mr. Renzi to cancel his trip to Iran.