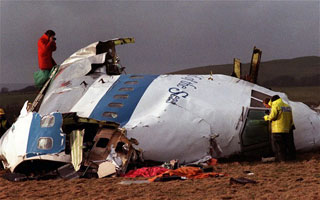 Source: telegraph.co.uk
A new documentary by Qatari broadcaster Al Jazeera claims the 1988 Lockerbie bombing was the work of Iran, following the shooting-down of an Iran Air flight six months earlier by a US Navy warship.

A missile fired by the USS Vincennes brought down Iran Air Flight 655 in July 1988, leading to deaths of 290 passengers and crew.

The programme, Lockerbie: What Really Happened? features an interview with former CIA agent Robert Baer, who states that CIA colleagues “to a man” told him that Iran was behind the Lockerbie bombing.

That view is supported by Abolghassem Mesbahi, who used to work for the Iranian intelligence service before defecting to Germany. In the programme, Mr Mesbahi says the bombing was carried out by the Syrian-based Popular Front for the Liberation of Palestine – General Command (PFLP-GC), at the behest of Iran’s supreme leader Ayatollah Khomeini.

Former Libyan intelligence officer Abdelbaset al-Megrahi was convicted of the bombing in 2001.