Maryam Rajavi: Terrorism under the name of Islam owes its existence to Iran regime 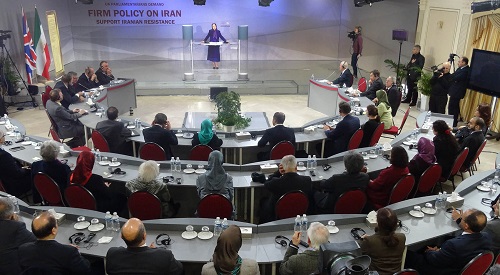 In a meeting on Friday with Members of Parliament from the United Kingdom in Paris, Maryam Rajavi, the President-elect of the National council of Resistance of Iran (NCRI), said that so long as the mullahs are in power in Iran, terrorism under the banner of Islam will continue to owe its existence to the regime.

Maryam Rajavi said the Iranian Resistance is warning yet again of the dangers posed by Iran’s ruling theocracy that inside Iran manifest themselves in the form of flagrant violations of human rights, and in the region work against stability by warmongering, terrorism and genocide in Syria, Iraq, Yemen and Lebanon.

Iraq was the first stop for the mullahs' regime in its ambition to build a global Islamic Caliphate. If this religious fascism were not in power in Iran, we would not have a shattered Iraq today with all its painful tragedies, Rajavi said.

Likewise, in Syria, there would not have been this violent war and genocide, and Yemen would not have turned into a killing-field by the regime's agents.

Rajavi said that the Iranian regime has an inspiring role, feeding and legitimatizing extremist groups, and it makes no difference if they are Sunni or Shiite.

The mullahs' theocracy is a source of inspiration for two basic tendencies: Extremism under the banner of Islam and retaliating against the West. The outcome of these two tendencies are terrorist attacks in Europe.

Maryam Rajavi said that every contract signed with Hassan Rouhani’s regime is a helping hand to the mullahs' Supreme Leader Ali Khamenei.

In reality, Rouhani is no different from Khamenei as he has been involved in all the regime's crimes over the past 37 years. Even if he were any different, he does not have much authority within the regime.

Today, at least half of Iran's GDP is controlled by Khamenei and his Revolutionary Guards Corps (IRGC). Therefore, most of the contracts signed with Iran are actually signed with companies that are affiliated with Khamenei or the IRGC.

The correct policy on Iran for the international community is to recognize the Iranian people's Resistance for regime change because the Iranian nation is the only force capable of neutralizing this danger and bringing democracy, stability and peace to Iran and the Middle East.

The Iranian people, the Iranian Resistance and the international community share common interests in adopting the right policy.