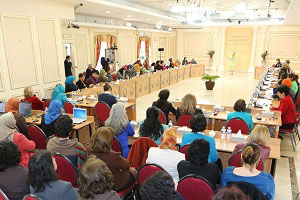 Maryam Rajavi: The campaign to overthrow mullahs’ regime is the struggle of all nations in the region for freedom and liberation from fundamentalism

On Sunday, March 02, on the eve of the International Women’s Day, an international conference was held in the main Headquarters of the Iranian Resistance in Auvers-sur-Oise. Mrs. Maryam Rajavi, President-elect of the Iranian Resistance, and a number of political personalities, women’s rights and human rights activists from various countries, especially from the Middle East, North Africa and Asia, participated in this conference.

Speakers reiterated that today, fundamentalism is the greatest plague for the countries in the region and the Islamic world, as well as the greatest threat for the Arab Spring. They said: This ominous phenomenon victimizes women the most. The speakers expressed their gratitude for the role played by the Iranian Resistance and its President Mrs. Maryam Rajavi for revealing the anti-Islamic nature of the regime ruling Iran which is the epicenter of the export of terrorism and fundamentalism. They stated that Mrs. Rajavi and the movement under her leadership have shown the world, in theory and in practice, that Islam is not what the demagogic fundamentalists claim it to be and use it as a pretext to oppress the people and drive women out of the political and social realms altogether. 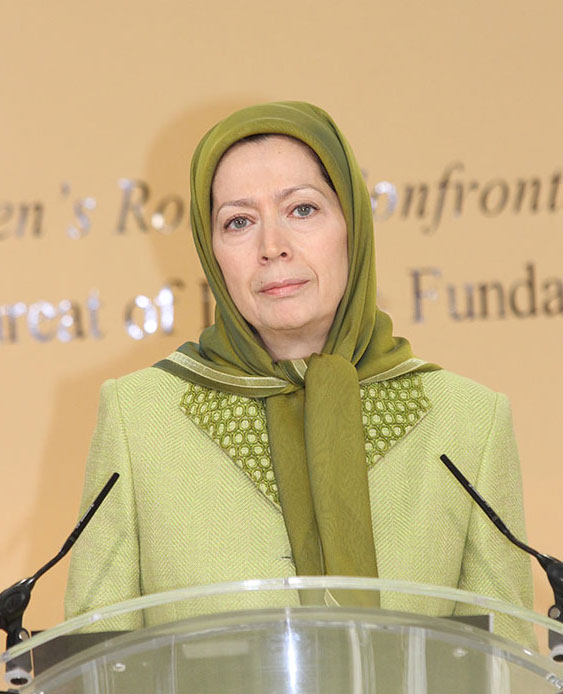 Maryam Rajavi stated that the presence of the personalities from Jordan, Palestine, Egypt, Syria, Morocco, Tunisia, Yemen, Sudan and Pakistan is the real visage of the nations of the Middle East and the Islamic countries and noted that this solidarity, despite diverse nationalities, languages, cultures and religions, is diagonally opposite to the discord, vengeance and enmity that the mullahs and their allies have inflamed in the region.

Rajavi referred to the fact that the struggle for overthrowing the mullahs ruling Iran is the struggle of all nations in the region and added: If it were not for this regime, Bashar Assad would have been toppled long ago; in Iraq the true representatives of the people would have been in power; and the situation in Lebanon, Palestine and other countries would have been different. Thus, supporting a Resistance which has arisen to remove this ominous regime not only expedites the freedom of the Iranian people, but contributes to the liberation of all peoples of the region from fundamentalism, terrorism and misogyny.

Rajavi referred to the fact that the political developments in recent years and the fundamentalism throughout the Middle East, North Africa, and the Central Asia have created a colossal challenge for women and she called on the women in the region to fight against the intervention of Iran in different world countries, in particular in the Middle East and in North Africa. She said: The campaign to overthrow this regime is linked to the fate of all peoples of the region. Therefore, in the 21st Century, the struggle for equality is intertwined with the struggle to get liberated from dictatorship and fundamentalism.

She expressed her sympathy with the oppressed peoples of Syria and Iraq and said: They are all being crushed by an evil war that is being directed by Tehran. Ending these calamities requires the ousting of the religious dictatorship ruling Iran. This is the most important responsibility of the women’s movement and the advocates of the ideal of equality.

Rajavi accentuated that progress in this path is contingent on solidarity and called on all women to do their utmost to support the People’s Mojahedin Organization of Iran(PMOI / MEK) members in Liberty prison, to secure the freedom of the seven Camp Ashraf hostages, to protect the vanguard women in Camp Liberty, and to help the Iranian people.