Mass protests across Iraq at Iran’s ‘puppets’ in their government 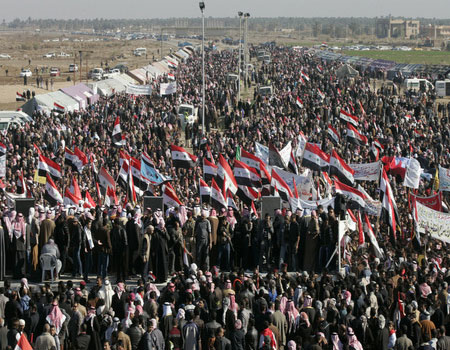 Millions of Iraqis have staged mass protests for the third month across the country in anger at al-Maliki’s government dictatorial policies and condemned Iran’s interference in their nation’s affairs.

Demonstrators in six provinces vowed on Friday to Nouri al-Maliki’s government that they would ‘either rule themselves or die’.

In city of Hawijah, protesters chanted to al-Maliki: “Get lost you criminal, you and all the other puppets of the Iranian regime.”

Demonstrators in Ramadi demanded that al-Maleki and his cronies be held accountable for their crimes, for destroying the country and for pandering to the Iranian regime.

They told their leaders: “We will not allow them to govern us forever. We will overthrow them and their constitution and they must expect to be held fully accountable by the people.”

A spokesman for the protesters in Fallujah told al-Taqeer TV: “Prime Minister, your government has caused nothing but sectarianism, and compared to all western countries, Iraq ranks number one in corruption in the world.”

Al-Jazeera TV reported that 14 people were killed and about 40 injured in two explosions in Diyalah Province.

One bomb exploded near the Omar ebn Abdulaziz Mosque in the district of Kanan in Diyalah Province, where Iraqi demonstrators demanding al-Maliki’s downfall were praying.

Al-Jazeera TV said the blast was aimed at killing people after their Friday prayers.

Furious demonstrators said Heydar Moslehi’s trip to Baghdad proved that the US had ‘handed Iraq over to the Iranian regime’.

A spokesman for protesters told Iraq’s al- Sharqiya TV: “We condemn his visit to Iraq and we reject the Iranian regime.”

Moslehi’s visit has also been widely condemned by religious and tribal leaders across Iraq.

The National Council of Tribes issued a statement reading: “We condemn the visit of Iranian regime’s intelligence minister to Iraq. We, along with the Iraqi people, demand his expulsion from Iraq.”

A statement by Council of Sheikhs in Diyala Province said:  “The Iraqi people will not gain anything from this visit but the collusion between this criminal and Iraq to intensify the suppression and torture of the Iraqi and Iranian people.”

And the Student Solidarity Association said: “Moslehi’s visit is equal to waging war with Iraq. He is the cause of all the destruction in Iran, Iraq and Syria. We do not accept the visit of a murderer of the Iranian regime.”