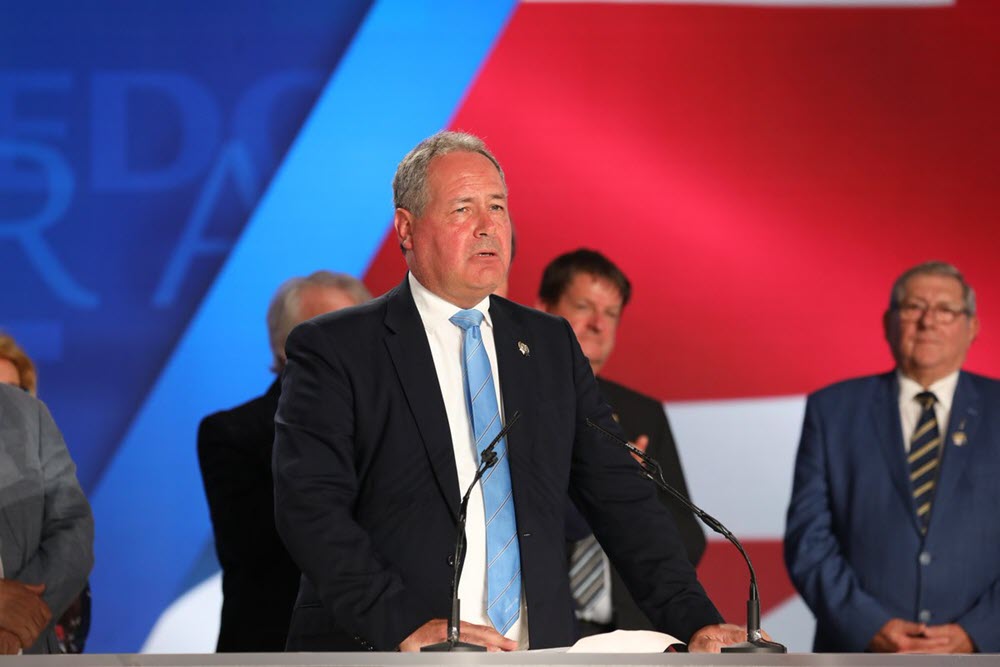 Bob Blackman, a Member of Parliament from the United Kingdom, writes ahead of a major ‘Free Iran’ rally in London on Saturday organized by the Anglo-Iranian communities and supporters of the National Council of Resistance of Iran (NCRI), that it’s time for the UK to blacklist the Iranian regime’s Islamic Revolutionary Guards Corps (IRGC) as a terrorist organization.

The rally is far from being the first of its kind, and it follows similar events that have been held recently in Washington D.C., Brussels, Berlin and Stockholm by supporters of the Iranian opposition coalition, the NCRI, and the People’s Mojahedin Organization of Iran (PMOI), also known as the Mujahedin-e Khalq (MEK).

Each of these events serves as a show of solidarity with anti-government popular protesters inside Iran, whose efforts to push out the religious dictatorship ruling their country have been ongoing since the outbreak of a nationwide uprising at the beginning of 2018, Bob Blackman MP wrote for PoliticsHome on Friday. They also demonstrate the widespread support for the organized resistance movement, NCRI, he said.

The NCRI and its main constituent, the Iranian opposition group, the PMOI (MEK), play a central role in organising these popular protests, which the regime has admitted on several occasions through its senior officials, Mr. Blackman pointed out. “It is no wonder that the NCRI has garnered as much support as it has among Western policymakers and among Iranians inside and outside Iran,” he said.

The rally in London has been planned for some time but it comes at an auspicious moment. The Islamic Revolutionary Guard Corps (IRGC) has recently stepped up its harassment of international shipping lines while making a special effort to target British ships following the seizure of an Iranian supertanker that was smuggling Iranian oil through the Straits of Gibraltar, on the way to Syria. Last Friday, a British-flagged vessel was seized by the IRGC in Omani waters in clear contravention of international law.

This aggression should make it increasingly clear to all policymakers that national security interests, as well as humanitarian concerns, requires the adoption of a firm policy on Iran, similar to that which the NCRI advocates.

The specific details of that policy include proscribing the IRGC in its entirety as a terrorist organisation – a measure already implemented by the US under President Trump. The White House also followed up on this by sanctioning the office of Supreme Leader Ali Khamenei, but the NCRI has urged both the US and its European allies to go even further by extending sanctions to the Ministry of Intelligence and Security, among other Iranian institutions.

The current tensions in the region underlines the need for such a strategy but it has spawned anxiety among various observers who fear that by putting additional pressure on the Iranian regime, the international community will be putting itself on a path toward conflict. At the same time, the IRGC’s threats against British shipping, alongside its previous limpet mine attacks on regional tankers and its downing of an American surveillance drone, makes it clear that Tehran bears all the responsibility for real, dangerous escalation.

Shrinking from this escalation leads inevitably to policies of appeasement but those policies may look attractive to some politicians when they believe the only alternative is another conflict in the region.

However, therein lies the false narrative that has governed Western policies toward the Islamic Republic for the better part of 40 years.

The choice between appeasement and open conflict is a false choice, which NCRI President-elect Maryam Rajavi, explained in the following way, “The spin doctors of the clerical regime used to claim that if the mullahs were to be overthrown, Iran would experience war, turmoil and secessions. Now, everyone can see that so long as this regime remains in place, war and crises will continue and intensify in the region.”

“Therefore, anyone who seeks freedom for Iran, anyone who wants to save Iran from destruction and chaos, anyone who wants global and regional peace and stability, must rise up to demand the overthrow of the mullahs’ regime”, NCRI president-elect added.

Mrs Rajavi’s remarks prove that there is an alternative, and it promises to defuse conflicts and solve ongoing crises for the foreseeable future, rather than simply kicking the can down the road.

That alternative consists of recognising the rights of the Iranian people to oppose their tyrannical government and to ultimately depose of the theocratic system in favour of true democracy. There is a great deal that the UK and its allies can do to support this goal and facilitate its success.

Sanctioning the IRGC and the Ministry of Intelligence would be a vital step but there is also value in simply shining an international spotlight on the PMOI and the NCRI, acknowledging the significance of recent and ongoing anti-government protests, and making it clear to the Iranian people that the international community will stand behind them when those protests push the existing regime to its breaking point.

The message of those protests is the same as that which will be conveyed to London on Saturday, “the Iranian regime is weakened by its isolation, the Iranian people will do the rest.”