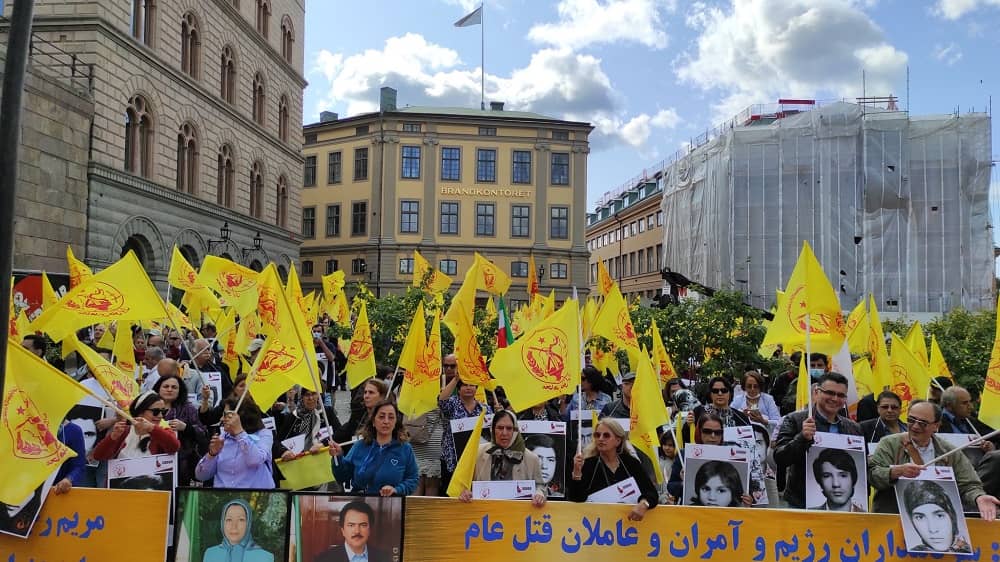 On Monday, Thousands of Iranians gathered in Stockholm, Sweden, calling for a firm policy towards the Iranian regime and to hold the regime to account for the 1988 massacre of the political prisoners in Iran. Most of the 30,000 victims of the massacre were members and supporters of the People’s Mojahedin Organization of Iran (PMOI/MEK).
Hundreds of the family members of the Iranian regime’s victims participated in this rally, calling for justice for their loved ones.
Mrs. Maryam Rajavi, the President-elect of NCRI, send a message to the demonstration.
“The world hears the calls for justice for the victims of the 1988 massacre in your demonstration. For 30,000 resistant and steadfast heroes, more than 90% of whom were members of the PMOI/MEK. They laid down their lives for freedom and walked to the gallows while shouting the name of Massoud Rajavi,”
“Your rally outside the Court of Stockholm is the Iranian people’s remarkable victory over the clerical regime that wanted to use this court as a tool to condemn the Call-for-Justice Movement.” Mrs. Rajavi said, adding,
“It is imperative, particularly for the European governments, to revise their policy of turning a blind eye on the largest massacre of political prisoners since World War II. As it was recently stated in the letter by a group of members of the European Parliament to the E.U. foreign policy chief, appeasing and placating the Iranian regime ‘contradicts European commitments to uphold and stand up for human rights.’
Europe and the world, in general, must take steps to fulfill the Iranian people’s desire for international prosecution of Ali Khamenei and Ebrahim Raisi for genocide and crimes against humanity.”

Message to the Iranians’ rally and demonstration in Stockholm – call for a decisive policy on #Iran – #1988Massacre: genocide and a crime against humanity – International tribunal to prosecute the clerical regime’s leaders, particularly Khamenei and Raisi pic.twitter.com/jo6XjjmMSL

Several human rights defenders also attended this event. One of the speakers of this event was Ms. Ingrid Betancourt, a former Colombian presidential candidate.
Ms. Betancourt praised Sweden for holding one of the 1988 massacre’s henchmen to account. “Sweden has embodied the good soul of humanity and represents the good of us. Knowing they are embracing our cause and activating the international community’s responsibility for accountability,” she said.
While referring to Ruhollah Khomeini’s fatwa in 1988, Ms. Betancourt said: “This massacre started with a fatwa that condemned victims because they did not adhere to the regime’s political insanity. They were buried in mass graves. The death commission across Iran did this massacre.”
Following Khomeini’s fatwa, the death commissions were formed across Iran, deciding the fate of the political prisoners in few moments. Ebrahim Raisi, the regime’s new president, was one of the members of Tehran’s “Death Commissions.”
While reminding this fact, Ms. Betancourt underlined that “how the absence of the international community’s action has emboldened the regime to put forward a face of genocide as the country’s president. “

Ingrid Betancourt, ex-Colombian Senator: The absence of the international community’s action has emboldened the regime to put forward a face of genocide as the country’s president. #Iran #ProsecuteRaisiNOW https://t.co/TYMZxyjZKp

Patrick Kennedy, a former member of the United States House of Representatives, was another speaker of the rally. He said: “We all know, those who fail to remember history are condemned to repeat. We must establish a permanent war crime tribunal to prosecute these crimes. If we fail to prosecute crimes and acknowledge them, we put our sons and daughters at risk. We remember the 1988 massacre because those who did it, like the [regime’s] new president Ebrahim Raisi should be held accountable for committing those atrocities. We must initiate international investigations and prosecute these criminals.”

Kimmo Sasi, the ex-Finland’s Minister of Foreign Trade, was the next speaker at the event. “The 1988 massacre was one of the darkest moments in Iran’s history. Thirty thousand political prisoners were murdered,” he underlined.
Mr. Sasi underlined that Nouri’s trial in Sweden is “the first step of a process in Europe. It means all those involved in the 1988 massacre should be held accountable, and I hope Raisi be brought to court. I call on the E.U. to take a new attitude toward Iran, put sanctions, bring those accused of human rights to courts of justice. “
Protesters also marched on the streets of Stockholm, calling on the international community to end decades of silence over the 1988 massacre and hold the perpetrators to account. They also supported their risen compatriots in Iran and condemned the regime’s ongoing human rights violations.

Previous article
Iran: Renewing The Invitation To Khamenei, Raisi, And Other Leaders Of The Regime To Participate In An International Tribunal For Genocide And Crimes Against Humanity
Next article
Iran: Coronavirus Fatalities Exceed 380,500