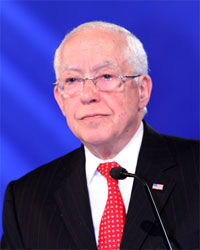 Michael Mukasey – March 24, 2012 Paris – Thank you very much.  Thank you to the sponsors of this wonderful conference. Thank you David Amess for your clear, penetrating comments on what is going on.  You know it seems as though we’ve come together many times before to talk about the plight of the residents of Ashraf, and now the plight of the residents of both Ashraf and the ironically named Camp Liberty.  And we were told on each of those occasions that these broadcasts, that these meetings were broadcast to Ashraf.  And we haven’t been told it, but I wonder whether perhaps they’re being broadcast at Camp Liberty as well.  I would suggest to you, I would suggest to you that there’s someplace else that they should be broadcast.  They should be broadcast to the United States State Department. [applause] Of course, based on what’s happened in the last couple of weeks, I can’t guarantee that the signal would get through.  I mean it may very well be that at the State Department, just as in Cuba and North Korea and Iran, they jam broadcasts with which they disagree.  I don’t know whether that’s true at the State Department or not.  I sincerely hope so. But I would hope that a broadcast like this would get through, because then they would see.  They would see Mrs. Rajavi open this session by extending her sympathy to the Jewish community of Toulouse.  They would see and hear her discuss what her religion really means and what it has to do with terrorism, which is nothing.  They would get a hint as to what kind of, quote, terrorist organization, unquote, this really is.

Of course this wasn’t the way it was supposed to be.  In 2003 when coalition forces invaded Iraq and encountered the residents of Ashraf, the Ashraf residents peacefully surrendered their weapons, the weapons they had, the only thing they had to defend themselves, and received in return on a piece of paper a guarantee that they would be treated as protected persons under the fourth Geneva Conventions, a guarantee signed on behalf of all coalition forces by a United States general.  And they received identity cards that carry the telephone number of the military police, commanded by another United States general who has appeared at these meetings before, General Phillips.  As I’m sure you know, because we’ve told the story several times, the Clinton administration put the MEK on a list of foreign terrorist organizations really to appease the Iranians in the hope that that would invite a dialogue.  Some dialogue.  Some dialogue, with the regime that only a couple of months ago plotted to assassinate a Saudi diplomat in the United States.  Those are the people they wanted to talk to.

The FBI went in in 2003 and vetted each of the residents of Ashraf to make sure that none of them were a terrorist, and in each case it was certified that none were.  The Iraqis, as we know, have been acting increasingly at the behest of the Iranian government, now that the United States has withdrawn.  And Nouri al-Maliki himself is behind the pressure that is being brought and the persecution that is being brought against the residents of both Ashraf and Camp Liberty.  This is how we get thanks for the sacrifices that were made by American troops and by the United States as a whole in freeing the people of Iraq.  The United Nations says transfer to Camp Liberty.  We’ve had 1,200 people transfer to Camp Liberty.  And we’re told each time, notwithstanding the completely inadequate conditions at Camp Liberty, that this is progress.  We’re making progress.  People are moving out of Ashraf into Camp Liberty and this is progress.  You know, I had an uncle once who died of progress.  He was—it’s true, he was in the hospital.  And every day the doctor came and checked on him and said he was showing progress, until one day he was dead.  And the family concluded he must have died of progress.  Ambassador Kobler reminds me of that doctor.  [applause] Of course, it’s even worse than that here because the potentially fatal disease that the residents of Ashraf have really comes from their designation as a foreign terrorist organization.  The U.S. designation.  And when I say the U.S. designation advisedly because we’re the only ones left in the civilized world who apply that designation.  And it’s time to get rid of it.

So, how is this all going to end?  Well, I suggest to you ladies and gentlemen that I’m very hopeful about how it’s going to end.  I’m a lawyer, I deal in evidence.  We have evidence.  We have statements from anonymous sources that those of us who are here voicing our views are behaving illegally under U.S. law.  It’s a funny thing about anonymous sources, what are they afraid of?  They must be afraid of something.  They’re afraid to have their names used.  Look at the timing.  The MEK tells the State Department and the Justice Department, “You know, you’ve been dragging your feet long enough with this designation.  We’re going to go into court.”  They gave them not only advanced notice that they’re going to do it, they gave them an advanced copy of the papers they were going to file.  And they disclosed the names of the people.  Mayor Giuliani, Tom Ridge, others, many others, who would have also filed paper in court as friends of the court, telling them on the basis of our experience and our knowledge—many people on that brief directly involved in national security affairs—that there is no basis, no reason for that designation.  They were told that in advance.  And lo and behold a couple days later subpoenas get served on the speaker agencies that send those people out to express their views.  I stopped believing in coincidences like that when I stopped believing in the Tooth Fairy, and that was a long time ago.  [applause]

But how is it going to come out?  Well, look at the behavior.  The people who release information to the press are afraid to give their names.  The State Department hears that papers are going to be filed on behalf of MEK, that papers are going to be filed by people who have spoken out in behalf of delisting, scurry to the Treasury Department, get them to serve subpoenas.  What are they afraid of?  The people here aren’t afraid.  Rudy Giuliani, John Bolton, Patrick Kennedy, Tom Ridge, they’re all sitting up there behind placards that have their names on them.  We all use our names.  The people who are not here, and who have been here before and who will be here again if necessary, Howard Dean, Ed Rendell, they used their names. They don’t get up as anonymous informants to speak at these meetings.  They get up, they give their names and they express their views.  So who’s going to prevail?  [applause] [chanting]

But can these people prevail in the face of the United States government?  Let me repeat the words of a  famous American industrialist, a man named Henry Kaiser who was once confronted by the U.S. government.  And people asked him, “Do you think that you can prevail against the U.S. government in the view that you’ve expressed and the course of action that you want to follow?”  And his response was, “You know what?  There’s no such thing as the U.S. government.  They’re just a bunch of people.”  Some of them are smart and dedicated and some of them are stupid and lazy.  And we know [applause] we know who’s on which side in the current dispute.

Ladies and gentlemen, I haven’t got any doubt about how this is going to come out.  And the way this is going to come out is that eventually right will prevail in my country.  And when right prevails in my country it is my sincere hope that it won’t be long before right prevails in your country and you restore Iran to the glorious civilization that it was and will be.  Thank you very much.  [applause]