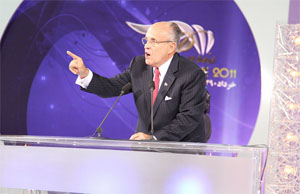 NCRI – Camp Liberty is a concentration camp where the residents have been abandoned by the US, the United Nations and its Iraqi envoy Martin Kobler, former New York mayor Rudy Guiliani has told a conference in Paris.

The Iranian dissidents needed urgent protection, and should all be moved to safety – and even taken to America – immediately, he said.

He said: “I said two years ago that Camp Liberty was going to be a concentration camp and worse, a killing field. I am very, very sad to say that I’ve turned out to be correct.

“I believe that the most honourable thing to do would be to take all those people who are now at Liberty and bring them to the United States of America immediately!

“But since we’ve abandoned decency and honesty, then I believe that only practical thing to do is to return them immediately to Camp Ashraf where they can protect themselves since we can’t seem to protect them.”

Mr Guiliani said said he believed it was inevitable that Iran would build nuclear weapons, adding: “The election of Hassan Rowhani brings it in my view closer rather than further away.

“The propaganda machine describing him as a reformer is hideous. This man is no reformer. All the candidates in this prior election were approved by Ayatollah Khomeini.

“He wouldn’t have been approved if he were truly a moderate, whatever that means. Rowhani served on the supreme national security council since 1991. He has been one of its most important members. He was a personal representative of the present Ayatollah.

“He sat on that council in 1993, in August of 1993, when the council approved killing what turned out to be over 80 Jewish people and injuring over 800 other people in Argentina, because Argentina refused to supply Iran with nuclear material.

“I conclude by speaking directly to the people at Ashraf and Liberty. We love you. We only hope and we wish that we had the strength and courage that you have, but our admiration for you is endless. God bless you and God will lead us to a free and a decent Iran because of you, the people of Ashraf and because of you and Madame Rajavi.”