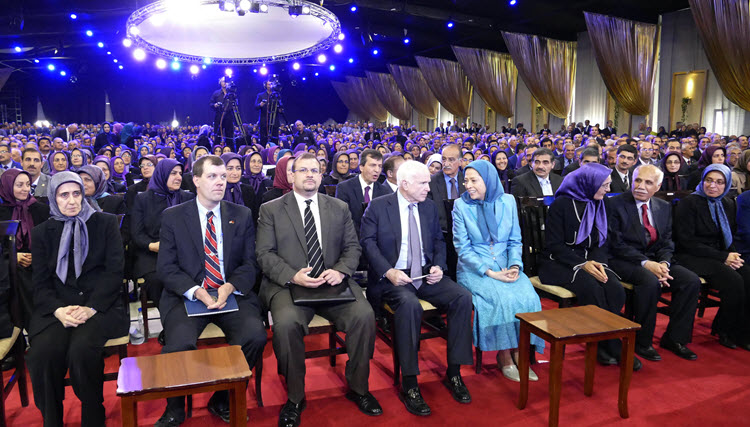 NCRI – In a journalists’ briefing on Monday, April 17, the Spokesman of the Foreign Ministry of the clerical regime lashed out against the meeting of Mrs. Maryam Rajavi, the President-elect of the Iranian Resistance, and Senator John McCain, the Chairman of the Armed Services Committee of the U.S. Senate. He said, this meeting is part of the “wrong policy and obscene conducts of the U.S. in expanding terrorism in the region,” adding, “This is a mistake that the U.S. government will pay for like other mistakes.”

What the mullahs’ regime refers to as a “wrong policy and obscene conduct” is the indication of an end to the failed policy of appeasement towards the clerical regime, as the main source of exporting terrorism and extremism; a policy that has had the most destructive results and has engulfed the entire region in war and crisis.

The hysterical reaction of the regime manifests its fear of the adoption of a firm policy vis-a vis the clerical regime and its export of terrorism and extremism, a policy that the Iranian Resistance has sought for years.
On April 14, 2017, Senator McCain met in Tirana, Albania, with Mrs. Maryam Rajavi, the President-elect of National Council of Resistance of Iran (NCRI), and discussed the latest developments in Iran, the clerical regime’s nefarious meddling in the Middle East and prospects for the future.

Prior to the meeting, Senator McCain visited one of the centers of the People’s Mojahedin Organization of Iran (PMOI/MEK) in Tirana and met with the PMOI members who were relocated to Albania from Camp Liberty, Iraq.

Senator McCain said: “It is a fact that Bashar Assad would not be in power today if it had not been for the Iranian Revolutionary Guards, and the Iranian help and the Hezbollah that came to Syria when Bashar Assad was about to fall. There is no doubt that Iran is attempting to stifle freedom and democracy throughout the region.”
Mrs. Rajavi pointed out, “Today, there is consensus on the destructive role of the clerical regime in the region and that the religious fascism ruling Iran is the main source of war, terrorism, and crisis in the Middle East.”
She underscored that regime change in Iran is not only indispensable to ending the flagrant violations of human rights in Iran, but is also necessary for eradicating war and crisis and establishing peace and tranquility in the region. As long as the clerical regime is in power, Mrs. Rajavi said, it will not stop its export of terrorism and fundamentalism.

Mrs. Rajavi added that from all indications the clerical regime is engulfed in a social, political, and economic deadlock. The Iranian people and the Resistance are more determined and prepared than ever to overthrow the ruling theocracy and to establish democracy and national sovereignty in Iran, she said.