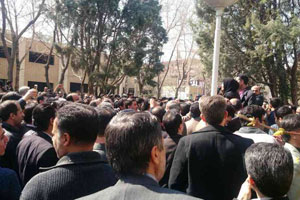 NCRI – Ms. Soheila Sadeq, Chair of the National Council of Resistance (NCR) Education Committee, commemorates the Teacher’s Day and calls on all noble teachers to participate in protest gatherings and urges all students and the youth to rise up in solidarity with the teachers.

Ms. Sadeq said, “A life under the poverty-line for millions of teachers and abandoning them in face of escalating prices and inflation with no job security and making teachers work for very low wages under the cover of temporary contracts, is a shame for the regime of velayat-e faqih that has squandered hundreds of billions of dollars of Iranian people’s assets in ominous nuclear projects, export of terrorism to and warmongering in the region, and in pervasive and growing suppression across the country.

“This regime’s response to the least demands by the teachers to provide for their minimum livelihood is repression, arrests and imprisonment. Instead of paying heed to the difficulties of the wretched life of teachers and to provide for their livelihood and social status, this regime is constantly increasing the budget for its suppressive organs that is three times that of the budget for education.

“In 2015, albeit the steep fall of oil revenues, the budget for suppressive organs jumped by 53%. This is while the budget for education only experienced a 12.8% increase that is even under the government’s officially announced inflation rate. None of the promises by the deceptive President of the regime Mullah Rouhani to improve teachers’ lives has materialized. At a time that as admitted by Mullah Rouhani the budget for the suppressive military and security organs has been paid up 100% (regime’s media, April 25), the shortage of funds for governmental expenditures are channeled to ministries such as the Ministry of Education with millions of teachers.”
As announced in the teachers’ protests in 128 cities in 31 provinces in April, wage increase, health insurance, housing and other job benefits that according to regime’s own employment laws apply, as well as the annulment of oppressive sentences against teachers and the release of their imprisoned colleagues and improvement in the educational environment, are at the top of teachers’ list of rightful demands.

“In these circumstances where by each passing day lethal crises further tighten the noose around regime’s neck and the regime finds itself at an impasse in the nuclear trap and its aggressive meddling in the region, especially in Yemen, it doubtless has no recourse as in the past, but to employ suppression and demagoguery to deceive the deprived population in face of popular discontent, rage and protests. In these circumstances, the sole avenue to attain the rights that have been taken away is solidarity and unity in action, as well as spreading the resistance against the religious tyranny ruling the country,” Ms. Sadeq added.

Chair of NCR Education Committee called for active participation in the protest gatherings on May 1 and May 8 and stressed that the nationwide teachers’ uprising is the symbol and beacon for the resistance of the Iranian people against a reactionary and criminal regime and Iranian people’s protest against oppression and plunder. This path heralds the overthrow of this antihuman regime and the establishment of freedom and democracy in Iran.