The National Council of Resistance of Iran United States Representative Office (NCRI-US) held a virtual conference today over the importance to reimpose the United Nations arms embargo on the Iranian regime. This event was attended by several American political dignitaries and experts. The participants of this event underlined that it is crucial for the world’s peace and security to reimpose all the UN sanctions on the Iranian regime. While the Iranian people are grappling with poverty and now the COVID-19 outbreak with its rising death toll, the Iranian regime wastes billions of dollars on terrorism and proliferation of weapons of mass destruction.

This event was moderated by Mr. Alireza Jafarzadeh, the Deputy Director of the NCRI-US office. 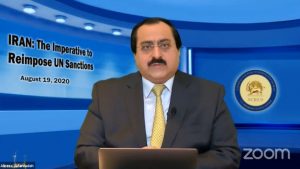 “More than 90,000 people have died of Covid-19 across the country. Instead of allocating money to save lives, the regime has provided $400 million to Hezbollah in Lebanon in the past six months as opposed to $300 million to counter the Covid-19 pandemic for a population of 85 million in Iran. That is 59 cents per person per month. While the highest paid nurses in Iran get at most $200 per month, the Iranian regime pays its proxies at least five times that amount. This shows where the priorities of this regime are,” said Alireza Jafarzadeh.

The first speaker of this event was David Shed, former acting Director of the Defense Intelligence Agency who underlined the regime’s malign activities in the region and around the globe, and how the regime oppresses Iranian people while wasting national wealth on terrorism. “The Iranian regime rules with a despotic hand when it comes to the interests of the Iranian people. Protests are suppressed by the regime’s security apparatus,” he said. 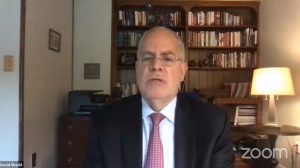 Another speaker of this event was Ambassador Paula Dobriansky, former US Special Envoy for Northern Ireland. “You cannot look at Iran out of the geopolitical context. Iran is engaged in malign activities that undermine not only our interests but also those of our allies,” she said. Ambassador Dobriansky highlighted that “removing the arms embargo would allow Iran to continue its hegemonic goals in the region.” 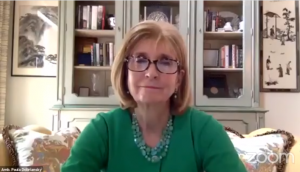 While referring to the regime’s brutal suppression of the major Iran protests in November, that according to the Mojahedin-e Khalq (MEK), resulted in over 1500 killed protesters Ambassador Dobriansky said: “All reports speak to the brutal actions and the egregious human rights record. Last November massive protests took place across all of Iran’s provinces. Lethal force was used to suppress and kill hundreds of innocent protesters, injuring thousands.”

Prof. Matthew Kroenig, from the Department of Government and the Edmund A. Walsh School of Foreign Service at Georgetown University, was also among the panelists of the NCRI’s virtual conference. 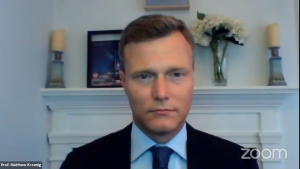 “On the threat of the regime, we see autocratic regimes posing a major threat to the U.S. Iran represents that threat in the Middle East. In the region, Iran’s nuclear program breakout time has shrunk to six months or less and is engaged in destabilizing activities in the region. This is a serious challenge,” Prof. Kroenig said adding, “lifting the arms embargo would pose a problem for the U.S. and its allies.”

The NCRI-US virtual conference was also attended by Ambassador Robert Joseph, former Under Secretary of State for Arms Control and International Security. “The question of extending the UN arms embargo provides a microcosm of wider issues. It is self-evident that continuing the arms embargo is necessary for the U.S. and the international community. Without the embargo, Iran would gain access to advanced capabilities to further its regional aggressions,” Ambassador Joseph stressed. 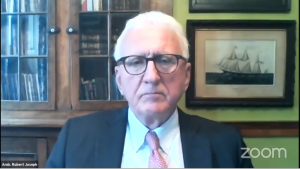 While referring to the regime’s malign activities, Ambassador Joseph said: “Failing to extend the embargo would be the end of any prospect for establishing multilateral sanctions in the future. Failure to lead and prevail on this issue would have negative consequences for the U.S. It could also have wider implications for the UN Security Council.”

“The regime is the greatest threat to its own people. The killing of people is a desperate act by the regime. Statements by our President and Secretary of State are important. Regime change must come from within and will come from within,” Ambassador Joseph concluded.

It is necessary to point to the NCRI’s president-elect, Mrs. Maryam Rajavi’s remarks regarding the necessity of the arms embargo being reimposed on the Iranian regime: An Arms Embargo against the religious fascism ruling Iran is indispensable to regional and global peace and security. The regime’s unimpeded purchase and sale of weapons will have no result other than terrorism, warmongering, and export of fundamentalism.
The Iranian people, with nearly 90,000 coronavirus fatalities, are, more than ever before, in need of allocating the astronomical budget for weapons, and nuclear and missile projects to their health and treatment.
The familiar slogans chanted by people of Iran and directed at the mullahs and against any appeasement of the regime are: “Leave Syria alone, think of us,” “Neither Gaza nor Lebanon, my life only for Iran.”
The regime’s leaders must face justice as the greatest perpetrators of terrorism in the world today as should their agents and mercenaries inside and outside Iran.

An #ArmsEmbargo against the religious fascism ruling #Iran is indispensable to regional & global peace & security. The regime’s unimpeded purchase & sale of weapons will have no result other than #terrorism , warmongering & export of fundamentalism.