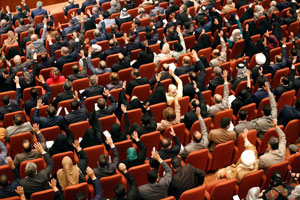 Abadi put off until next week a vote on defense and interior ministers.

Hadi al-Ameri, a  notorious agent of the Iranian regime in Iraq, who had been rumored to be the next interior minister was kept out of the cabinet for the moment. Hadi al-Ameri, leads the Badr Corps (Badr Organization) created in Iran in 1980s.