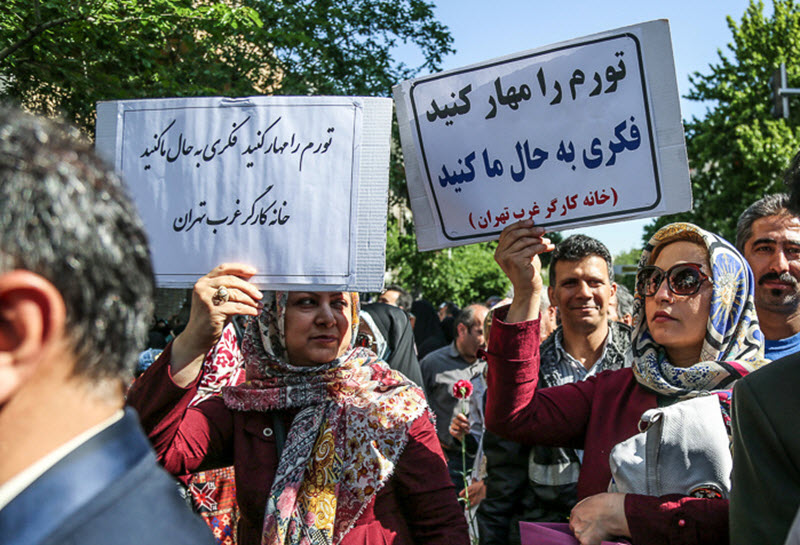 Female workers in Iran are toiling away without basic rights in conditions described as “new slavery”, according to the Women’s Committee of the National Council of Resistance of Iran (NCRI).

International Labour Day, celebrated annually on May 1, is an occasion to defend the rights of workers, but these do not exist for female (or any) workers in Iran. Many labourers have been working without pay for months or even over a year. In desperation, these poor souls have turned to high-interest loans, selling their organs, and even setting themselves on fire to escape poverty.

The situation is made even worse for female workers because women are “systematically discriminated against in the law, in employment and job market, and in every other realm of life”. This makes it even harder for female workers to advocate for their rights and gain fair employment.

The main problems of female workers in Iran include:

• low wages: women often toil in factories for 10 to 12 hours, earning only a dollar a day, which is a third below the minimum wage and seven times below the poverty line. Those who do not have a specific employer are ripped off by intermediaries who sell their products.

• inferior jobs: Iranian law gives preference in employment to men, so women are often only able to take unmonitored and unofficial workshop jobs. Women desperate to earn money to support their families are forced to take whatever job they can.

• no insurance: 80% of those without insurance in Iran are women because they are more likely to be in unstable jobs where employers do not pay benefits or insurance.

• lack of job security: women are the first to be laid off in economic crises because employers believe that they are less productive because of (potential) marriage and pregnancy. Two-thirds of those unemployed in Iran are women.

Ahmad Amirabadi Farahani, a member of the presiding board of the mullahs’ parliament, said: “Oppression of women in some production units with regards to the payment of their wages and their long working hours is new slavery.”

Fatemeh Pourno, Secretary of the Union of Women Workers in Qazvin, said: “Female workers work in step with men in production units, but do not receive equal wages. They are not aware of their legal rights. Therefore, they do not even find out if their insurance has been considered in their payrolls. But they do not file any complaints in this regard since they fear being fired by their employers.”