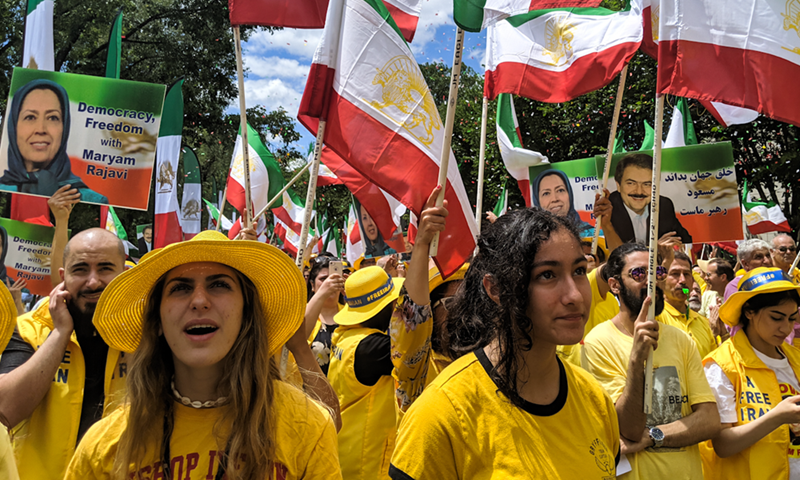 The following is a rebuttal to an article in Newsweek about Iranian opposition groups, in particular, the main Iranian opposition, the Mujahedin-e Khalq (MEK or PMOI). As Newsweek is yet to publish it, we are posting it here and hope you would find it useful.

“Iran’s Opposition Groups are Preparing for the Regime’s Collapse. Is Anyone Ready?” (Newsweek, August 28) points to the mullahs’ increasingly precarious situation in Iran, noting that “something is different now” and that prospect of the “collapse of the Tehran regime has raised the question of what kind of Iranian government might come next.”

Indeed, the regime, encircled with irremediable internal, regional and international crises, is on borrowed time; nothing can prevent the Iranian people and the organized resistance from overthrowing it. The coalition of the National Council of Resistance of Iran (NCRI) and its main component, the Mujahedin-e Khalq (MEK), stand out as the only viable democratic alternative to the mullahs’ regime and capable of ensuring a peaceful and orderly transition of power to the people of Iran.

In discussing what the alternative “government” might be, however, the article relies on commentary by unnamed experts and discredited characters who oppose the U.S. policy shift to “maximum pressure” on the regime. In doing so, it has cast doubt on the “democratic credentials” and “popular base” of the MEK, despite acknowledging that it “is the oldest, best organized and best known of several Iranian opposition movements.” The article’s MEK bashing leads to one conclusion: absent a viable alternative, Realpolitik calls for the preservation of the status quo, namely continued rule of the murderous regime in Tehran.

The article has recounted a litany of stale and unsubstantiated allegations against the MEK but has inexplicably and completely ignored a wealth of independent and scholarly research and countervailing evidence that have debunked these anti-MEK narratives in their entirety.

Under the mullahs’ totalitarian state, the slightest favorable reference by ordinary citizens regarding the MEK risks long prison terms or even execution. The regime has so far killed over 100,000 MEK activists. These victims have surviving families, friends and colleagues who continue to support the MEK. Even now, not a day goes by without the regime’s leaders and state-run press expressing grave concerns over the MEK’s growing influence and popularity among the people, especially women and youths. Officials like the regime’s Supreme Leader and President have repeatedly sounded the alarm over the MEK’s effective role in organizing and leading the 2018 uprisings. In April 2019, the intelligence minister admitted the regime had arrested 116 MEK-affiliated teams. Dozens more, according to intelligence officials, were detained in East Azerbaijan province. All this presents a more realistic assessment of the level of the MEK’s support inside the country.

Before writing this article, Mr. Broder was invited to visit the MEK’s new home, Ashraf 3, in Albania and speak to members freely and privately. Regrettably, he did not take up the offer. Dozens of other journalists did so and presented a very different image of the MEK than the one portrayed in his piece.

To set the record straight the following is in order:

1. The assertion that the MEK murdered the regime’s nuclear scientists is absolutely false. In a background briefing on September 28, 2012, two senior State Department officials went on record as saying, “The United States Government has not claimed that the MEK was involved in the assassination of scientists in Iran.” The author’s deliberate disregard for official U.S. refutation of this allegation casts serious doubt on his motives and impartiality.

2. The blacklisting of the MEK, as initially reported by the Los Angeles Times in 1997 and ironically by “Newsweek” in September 2002, was an act of political expediency by the Clinton administration. “[There] was White House interest in opening up a dialogue with the Iranian government. At the time, President Khatami had recently been elected and was seen as a moderate. Top Administration officials saw cracking down on the [MEK], which the Iranians had made clear they saw as a menace, as one way to do so,” the magazine quoted Martin Indyk, the Assistant Secretary of State for Near Eastern Affairs, at the time of the MEK’s designation, as saying. Nor was the MEK’s delisting an act of charity as Daniel Benjamin brazenly claims. Secretary Clinton was compelled to act because America’s second-highest court, the Court of Appeals for the District of Columbia Circuit, having found no evidence of MEK involvement in terrorism, unanimously ordered her to resolve the issue. Some 100 bipartisan Members of Congress had also urged MEK’s delisting.

3. The MEK did not “support the takeover of the U.S. embassy” nor did it break “with Khomeini over his decision to release the American hostages.” The episode was an attempt to marginalize the democratic opposition, particularly the MEK, which had vehemently opposed the newly drafted constitution based on the principle of the velayat-e faqih (absolute clerical rule). By creating an anti-American hysteria, Khomeini sought to ensure its passage. In a Friday Prayer sermon on the sixth anniversary of the hostage-taking, then-Chief Justice Abdol Karim Moussavi Ardabili elaborated on the mullahs’ motives: “[The embassy takeover] brought about the fall of the Provisional Government, the isolation of the liberals and the confusion of left-wing groups and the Monafeqin (the MEK) and exposed their real faces. As Imam Khomeini said, this revolutionary move was greater than the first revolution.”

The MEK’s struggle against the regime has always been defined by a commitment to democracy. In his 1989 book, The Iranian Mojahedin, even Ervand Abrahamian, a MEK detractor, wrote: “In criticizing the regime’s political record, the Mojahedin moved the issue of democracy to center stage. They argued that the regime had engine[ed] the American hostage crisis to impose on the nation the ‘medieval’ concept of the velayat-e faqih, […] had broken all the democratic promises made during the revolution; that an attack on any group was an attack on all groups; that the issue of democracy was of ‘fundamental importance.’”

4. The mass execution of MEK members and sympathizers by the mullahs’ regime began in earnest after a peaceful demonstration by half-a-million MEK supporters in Tehran on June 20, 1981. Khomeini’s deposed successor, the late Ayatollah Hossein-Ali Montazeri, and Amnesty International have categorically rejected any links between the massacre of 30,000 political prisoners in 1988 and the MEK’s incursion in western Iran. The mullahs have used this as justification for their massacre.

5. The author of the Human Rights Watch report written 14 years ago, and based on telephone interviews, was on the payroll of a notorious and discredited Iranian regime’s lobby group in Washington. In addition, in a letter to HRW Executive Director Kenneth Roth, then Col. (now Brig. Gen. ret.) David Phillips, the commander of the U.S. 89th MP Brigade that protected the MEK’s Camp Ashraf in 2004-2005, chastised the HRW for regurgitating the Iranian regime’s propaganda.

“I believe that your recent report was based on unsubstantiated information from individuals without firsthand knowledge or for reasons of personal gain. I have spoken to large groups of MEK/PMOI members and have also had one on one private conversations with individual members. At no time did any member, ranging from young male and females to the very senior leadership, ever report any of the type conduct outlined in your recent report,” Col. Phillips wrote.