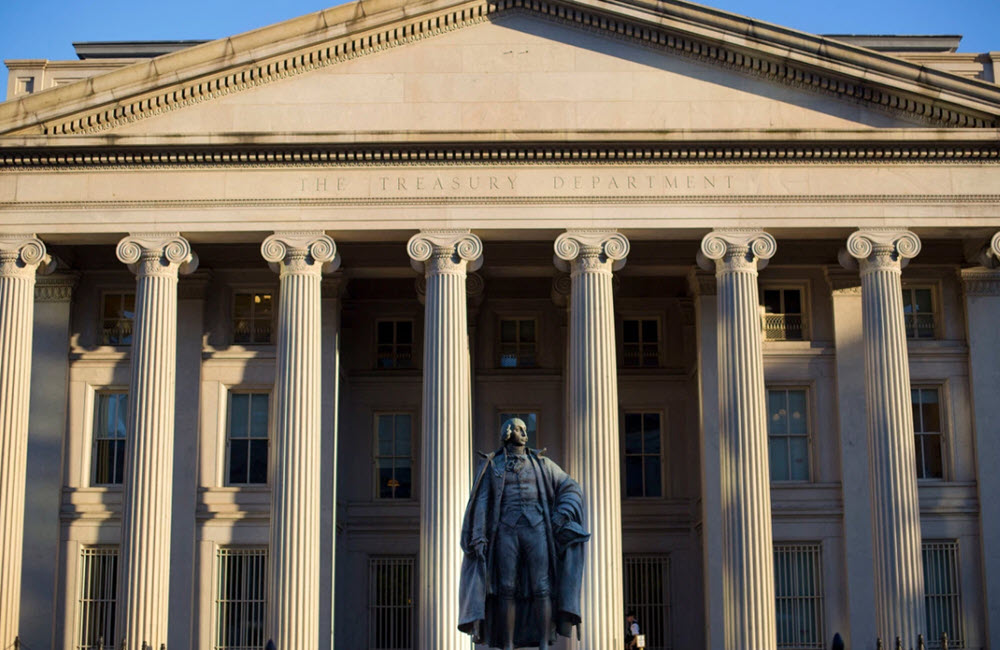 The US Treasury building in Washington

The Treasury Department's Office of Foreign Assets Control (OFAC) took action against a network of front companies and agents involved in the procurement of sensitive materials for sanctioned elements of the Iranian regime’s nuclear program.

The individuals and entities targeted on July 18, 2019 are based in Iran, China, and Belgium and "have acted as a procurement network for Iran’s Centrifuge Technology Company (TESA), which plays a crucial role in Iran’s uranium enrichment nuclear program through the production of centrifuges used in facilities belonging to the Atomic Energy Organization of Iran (AEOI)," the Treasury said in a statement.

The Treasury sanctioned TESA on November 21, 2011 pursuant to Executive Order (E.O.) 13382, which provides the authority to impose sanctions on proliferators of weapons of mass destruction.

“Treasury is taking action to shut down an Iranian nuclear procurement network that leverages Chinese- and Belgium-based front companies to acquire critical nuclear materials and benefit the regime’s malign ambitions. Iran cannot claim benign intent on the world stage while it purchases and stockpiles products for centrifuges,” said Treasury Secretary Steven T. Mnuchin. “The U.S. government is deeply concerned by the Iranian regime’s uranium enrichment and other provocative behaviors, and will continue to target all who provide support to Iran’s nuclear program.”

U.S. National Security Advisor John Bolton on Thursday said: "One of the worst mistakes of the Iran deal, now on full display, was allowing Iran to maintain enrichment capabilities. There should be no enrichment for Iran. Maximum pressure continues until Iran abandons its nuclear ambitions & malign activities."

One of the worst mistakes of the Iran deal, now on full display, was allowing Iran to maintain enrichment capabilities. There should be no enrichment for Iran. Maximum pressure continues until Iran abandons its nuclear ambitions & malign activities. https://t.co/NKXXWDRHIK

Among the materials sought by this global network, comprised of seven entities and five individuals, were items controlled by the Nuclear Suppliers Group (NSG), a multinational export control regime. Under United Nations Security Council Resolution 2231 (2015), which endorsed the JCPOA, the sale, supply, or transfer to Iran of NSG-controlled items requires advance, case-by-case approval from the UN Security Council, with very narrow exceptions that do not apply in this case.

Iranian firm Bakhtar Raad Sepahan, in coordination with its Belgium-based office, facilitated deals for the purchase of hundreds of thousands of dollars’ worth of Chinese-origin aluminum products and their shipment from China to Iran on behalf of TESA. The aluminum goods are required for use in Iranian centrifuges, which are manufactured by TESA, and includes some items controlled by the NSG.

TAWU BVBA is Bakhtaar Raad Sepahan’s Belgium-based office. In coordination with Bakhtar Raad Sepahan, TAWU BVBA brokered deals for the aluminum goods required for use in Iranian centrifuges. Sohayl Talebi is the managing director of TAWU BVBA, with an extensive background in metallurgical engineering. He coordinated with Karimi to procure aluminum goods on behalf of TESA.

China-based Henan Jiayuan Aluminum Industry Company, Limited contracted to sell aluminum goods worth more than half a million dollars, including NSG-controlled items, to TAWU BVBA for use by TESA, and coordinated the shipment of the aluminum goods from China to Iran with TAWU BVBA and Bakhtar Raad Sepahan.

Bakhtar Raad Sepahan, Adegani, TAWU BVBA, Talebi, Sanming Sino-Euro, and Henan Jiayuan are being designated pursuant to E.O. 13382 for having provided, or attempted to provide, financial, material, technological, or other support for, or goods or services in support of TESA. Sanming Sino-Euro is also being designated pursuant to E.O. 13382 for being owned or controlled by, or acting or purporting to act for or on behalf of, directly or indirectly, Talebi.

Salim Borji, the managing director of Sabz Co., has led Iranian delegations to China to meet with metal suppliers and has signed contracts with, and made payments to, Chinese suppliers on Sabz Co.’s behalf. Mehdi Najafi is a representative of Sabz Co. who has worked with Chinese suppliers to procure various metallic products for TESA.

Mohammad Fakhrzadeh, a commercial director for TESA, has coordinated the purchase of various Chinese-origin aluminum goods that are associated with Iranian centrifuge components.

Fakhrzadeh is being designated pursuant to E.O. 13382 for acting or purporting to act for or on behalf of, directly or indirectly, TESA.

In addition, person that engage in certain transactions with the individuals and entities designated Thursday may themselves be exposed to designation. Furthermore, any foreign financial institution that knowingly facilitates a significant transaction or provides significant financial services for any of the individuals or entities designated today could be subject to U.S. correspondent account or payable-through account sanctions.