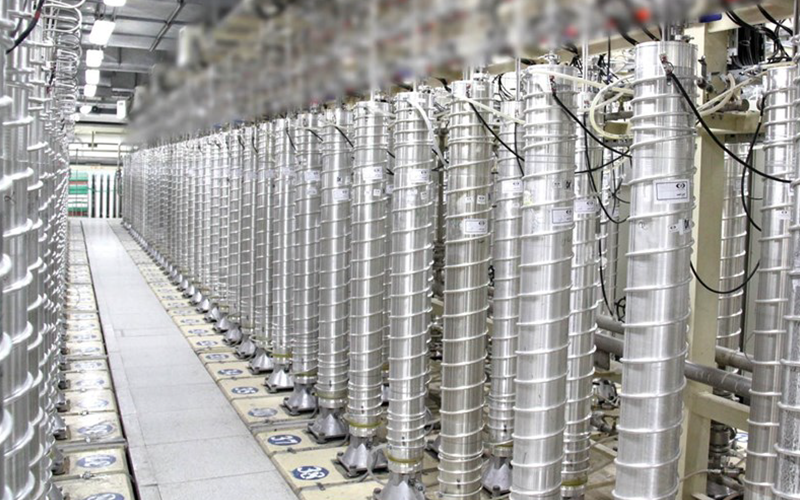 The Iranian regime said on Saturday it was now capable of raising uranium enrichment past the 20% level, in violation of the 2015 international nuclear deal with world powers.

“We have started lifting limitations on our Research and Development imposed by the deal...It will include development of more rapid and advanced centrifuges,” the regime's nuclear agency spokesman Behrouz Kamalvandi told a televised news conference.

“The European parties to the deal should know that there is not much time left, and if there is some action to be taken (to salvage the nuclear deal), it should be done quickly.”

Since May, Iran's regime has begun to scale back its commitments to the pact.

The deal capped the number of centrifuge enrichment machines installed in Iran at roughly 6,000, down from around 19,000 before 2015, Reuters reported. It allows Iran's regime to refine uranium only with first-generation IR-1 centrifuges and to use small numbers of more advanced centrifuges solely for research, but without stockpiling enriched uranium, for a period of 10 years.

“Machines developed by our own research and development will help accumulate reserves. This was done yesterday and announced to the IAEA today,” Kamalvandi said, referring to the UN nuclear watchdog which is monitoring compliance with the deal.

“This includes IR-6 machines which have now been fed (uranium) gas. A chain of 20 IR-4 centrifuges has also been started. The IR-6 has also started as a chain of 20 since yesterday,” he said. “We will soon test our IR-8 centrifuge cascade by injecting gas into 3 IR-8 machines.”

Advanced centrifuges can enrich at a much faster pace.

The accord also capped the level of purity to which Iran can enrich uranium hexafluoride, the feedstock for centrifuges, at 3.67 percent, which is suitable for civilian power generation and far below the 90 threshold of nuclear weapons grade.

The 20 percent level represents a significant leap towards bomb material.

Mrs. Maryam Rajavi, the President-elect of the Iranian Resistance, immediately warned after the nuclear deal was signed on July 14, 2015: "This agreement does not close the mullahs’ path to deception and access to a nuclear bomb".

Prior to that, on November 24, 2013, Mrs. Rajavi had said: "Any leniency, hesitancy, and concessions by the international community will prompt Khamenei to once again move toward manufacturing through deception and cheating.”

In his book, "National Security and Nuclear Diplomacy" Hassan Rouhani, president of the clerical regime, wrote: "In 2002, the activities were moving in a calm atmosphere, but the Mujahedin (PMOI/MEK) suddenly made a lot of noise by making false accusations… while our Atomic Energy Organization wanted to … notify the IAEA in a fait accompli". He was referring to the revelation of the regime’s secret nuclear sites by the MEK in 2002.

Britain’s Sunday Telegraph disclosed on March 5, 2006 that in a public speech Rouhani had “revealed how Teheran played for time and tried to dupe the West after its secret nuclear programme was uncovered by the Iranian opposition in 2002.”