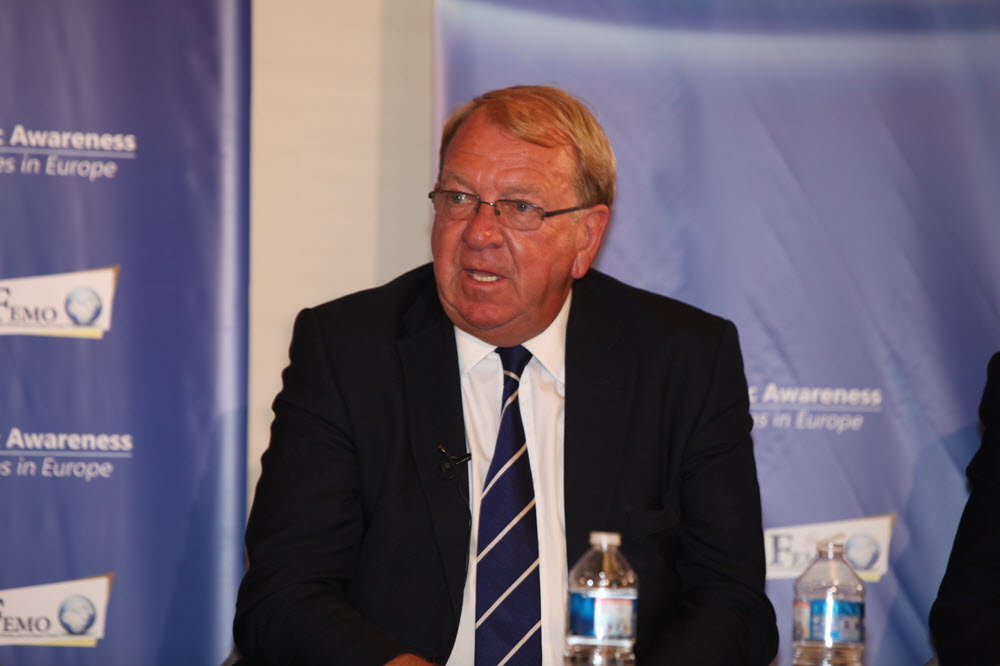 The Iranian regime is trying to blame United States President Donald Trump for his regime’s collapsing economy, but the opposite is true, according to former European lawmaker Struan Stevenson.

Iran’s regime diverted most of the cash from the 2015 nuclear deal to funding Bashar al-Assad’s brutal civil war in Syria, with additional resources split between the Houthi rebels in Yemen, the terrorist Hezbollah in Lebanon, Hamas in Palestine and the vicious Shi’ia militias in Iraq. The little money that was left was funneled, as usual, into the ayatollah’s personal bank accounts. The Iranian people got nothing, Mr. Stevenson argues in an opinion piece for the United Press International.

The nuclear deal was a grave error from day one, he wrote. It forbade inspectors from the International Atomic Energy Agency from inspecting any sites controlled by the military inside Iran. Virtually all of the theocratic regime’s secret nuclear program was being developed at military sites, so the deal was fatally flawed from the outset. Page after page of the Joint Comprehensive Plan for Action nuclear agreement read like a telephone directory, listing names of Iranian companies and individuals from whom all sanctions were to be lifted, including business and industries like banking, insurance, metals, aviation, shipping, arms and general trade markets, even covering the reopening of Iran’s right to sell carpets and caviar to the West.

Ludicrously, the deal even ordered the West to end its “exclusion of Iranian citizens from higher education coursework related to careers in nuclear science, nuclear engineering or the energy sector.” In other words, Western universities would be encouraged to train Iranians in advanced nuclear technology to ensure that they were properly equipped to build a nuclear bomb! Unbelievable! No wonder Trump denounced the deal even before he became president.

Worse still, under the JCPOA, one of the individuals from whom sanctions were to be removed, enabling him to travel freely in Europe and America, was none other than Gen. Qasem Soleimani, the commander of Iran’s Quds Force, the extra-territorial wing of the Islamic Revolutionary Guards Corps, Iran’s equivalent of the Gestapo, Mr. Stevenson pointed out. The IRGC was recently listed as a foreign terrorist organization by the U.S. State Department. Soleimani, who reports directly to Iran’s supreme leader Ali Khamenei, has personally directed the mullahs’ proxy wars throughout the Middle East.

Soleimani’s Quds Force has also ruthlessly targeted opponents of the repressive Iranian regime in America and Europe, using threats, bomb attacks and assassination to eliminate any voices of dissent, even using its embassies as bomb factories and terror cells, for plotting atrocities. The mullahs have Iranian Intelligence agents implanted in every European embassy, continued Mr. Stevenson’s op-ed in the UPI.

A report published only last week by Germany’s Domestic Security Agency identified the Iranian embassy in Berlin as the headquarters of the Ministry of Intelligence & Security and Quds Force and stated that their agents have been very active in Germany plotting terror attacks and assassinations against the People’s Mojahedin of Iran/ Mojahedin e-Khalq (PMOI/MEK), the main Iranian opposition network.

A year ago, four Iranian Intelligence agents, including one so-called diplomat, tried to bomb a major opposition rally in Paris. They are now awaiting trial in Belgium on terror charges. In Albania, the MOIS plotted to bomb an Iranian New Year Nowruz gathering. The Iranian ambassador and first secretary were expelled from the country. In America, several Iranian intelligence agents were arrested and charged with carrying out surveillance operations in preparation for assassination attempts aimed at prominent officials in the PMOI/MEK.

Even in Scotland, The Times recently uncovered a plot by armed MOIS agents to threaten and kill anti-regime protesters in Glasgow. These are the MOIS and Quds force agents that Soleimani commands and yet Obama’s nuclear deal was happy to give him the freedom to travel around the West at will, orchestrating terror at every stop. Trump put a stop to that.

The U.S. withdrawal from the JCPOA was a smart move and the reimposition of tough sanctions on this evil regime may aid the 80 million Iranian citizens who have been demonstrating and protesting in their millions in almost every town and city in Iran since the end of 2017, demanding the restoration of freedom and democracy and regime change. The mullahs’ predictable response to the renewal of sanctions has been to bomb oil tankers in the Gulf, shoot down an American drone, provide missiles for the Houthis to fire into Saudi Arabia and threaten the West.

Inside Iran, the torturers and executioners are busier than ever, determined to crush all opposition under a tidal wave of fear and oppression. The abuse of human rights and women’s rights has become an international scandal; thousands of protesters have been arrested by the IRGC, where they face imprisonment, torture and even execution, as the mullahs attempt to terrify the opposition into submission. But the Iranian people have lost their fear. Revolution is in the air, aided and abetted by brave members of the PMOI/MEK, especially in the resistance units inside the country, who risk their lives daily to bring an end to this evil tyranny.

Exploiting the weakness that has characterized Europe’s grovelling attitude to their medieval regime, the mullahs have now begun to dismantle their own commitments to the JCPOA, restarting IR-2 and IR-2 m type centrifuges to accelerate the enrichment of uranium, in open breach of the agreement. They have threatened to ramp up this process unless the EU does something quickly to alleviate the economic hardship being caused by the U.S. sanctions.

Faced with such blackmail, some EU member states, like the United Kingdom, have protested and stated that they are considering following America’s lead with tough sanctions. It is time the rest of Europe followed suit. Surely Federica Mogherini, serving out the final weeks in her post as the EU’s high representative for foreign affairs and security, can break free from her appalling legacy of appeasing this repellent regime and throw down the gauntlet of EU sanctions? Her days of travelling to Tehran, donning the veil and posing for selfies with the mullahs are surely over? She must show that she has some backbone by supporting the Iranian people, rather than the turbaned tyrants in Tehran.