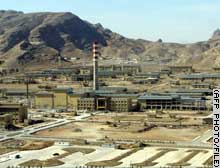 Today, I would like to inform you of a new aspect of the clerical regime’s clandestine activities to acquire nuclear weapons. In August 2002, the National Council of Resistance of Iran revealed for the first time the Natanz and Arak secret nuclear sites. A few months later, in February 2003, the NCRI revealed information on a secret site in Ab-e Ali near Tehran under the cover of a company called Kala electric. These revelations enabled the international community to obtain the real and at the same time troubling picture of the actual dimensions of the Iranian regime’s nuclear activities.

Based on new information that the Iranian Resistance has obtained, despite repeated expressions of concern by the international community and the resolution adopted by the governing board of the International Atomic Energy Agency, Tehran is continuing its nuclear weapons program full forces. It is continuing its uranium enrichment program despite demands by the IAEA to the contrary.

I would like now to inform you of a new secret nuclear site in Isfahan region.

1.    The site has been built to test centrifuges that enrich uranium. It is located 15 kilometers east of Isfahan under the names of “Isfahan’s fuel research and production center.” The site is situated in a 150,000-hectare area. A new site for running and testing centrifuges to enrich uranium is built in this complex. The Isfahan complex contains the following systems and facilities.
2.    Center for Nuclear Research: This facility is engaged in research on nuclear fuel. The director for this facility is named Eng. Mansour Habashizadeh.
3.    ECF (Uranium Conversion Facility): The site makes use of the Yellow Cake, produced at the facility in Ardakan (Yazd Province) as raw material to produce Hexafluoride, uranium ore and uranium oxide. Hexafluoride is transferred into a gas and used for uranium enrichment. These items are used in the Natanz site to enrich uranium. The director of this facility is Eng. Sowlat-panah. This facility will be completed by 2006.
4.    FMP (Fuel Manufacturing Plant) facility: This facility is built next to the UCF facility. It does the final stages of transforming uranium and the products are sent to the Natanz site. Eng. Gholam-ali Doust-Mohammadi is the director of this site, which will be compeleted by 2006.
5.    VCP (centrifuge) test facility: This facility is used to run and install testing centrifuges used for uranium enrichment. 120 to 180 centrifuges are planned to be installed at this facility, which is located to the west of the UCF facility and next to the FMP facility. It is known as Site 103. It is near a forest and is being constructed in an area that was previously the site of a helicopter hangar. The director of the site is Eng. Alireza Farhang.
6.    To ensure the continuation of its nuclear program, even during international inspections or in case of aerial bombardment, the clerical regime has set up a collection of smaller nuclear site in different parts of Iran. These sites not only supplement the Natanz nuclear facility but also will prevent the program from a complete shutdown if and when the main sites sustain damages or cease to operate. Two similar sites have been set up in Hashtgerd, near the city of Karaj, west of Tehran.
7.    Isfahan’s centrifuge site is operated under the cover of a company called “Pishgam Engery Industries Corporation,” which is affiliated to the Iranian regime Atomic Energy Organization. This company handles matters relating to UCF and FMP in Isfahan as well. The company is registered under an electronics company and Alireza Farhang, who heads the new centrifuge site, is its director general. Members of the board of directors include:
–    Eng. Mohsen Al-e Rassul,
–    Eng. Majid Sa’abani-Kia
–    Eng. Mansour Habashizadeh, (also member of the board of Isfahan’s Fuel Research and Production Center);
–    Eng. Alireza Farhang
8.    The company’s address in Isfahan is: Artesh (Army) Street, Shahid (Martyr) Zahrai alley, number 140. The company has an office in Tehran, which coordinate its work with the Atomic Energy Organization. The address is: Fatemi Square, Bisotoun Street, Second Street, number 11, first floor. This is brick-made building with no markings or signs on the entrance. Eng. Mehdi Amri is in charge of this office.
9.    The budget for the Isfahan project is procured by the Energy Industries Development Corporation and is confidential. The Atomic Energy Organization directly funds the budget, which is approved by the Supreme National Security Council.

Latest development at the Natanz Site:

On September 25, 2003, the IAEA revealed that it has found minute quantities of enriched uranium at Kala Electric site in northern Tehran.

This company deals with the Planning and Budget Organization only through Aghzadeh’s office. Given security and intelligence concerns, members of the company are not allowed to contact AEO’s staff.

Dr. Ghanadi, the Head of the Nuclear Fuel Directorate of the AEO, is a member of the Kala Electric Board of Directors.

The company has administrative, financial, construction, equipping, commercial, technical, and engineering and control directorates. It has also an executive directorate headed by Haj Bayat who is based in Abe-Ali site. He carries out coordination between AEO officials and experts involved in building the centrifuges in Isfahan. He has 85 experts and specialists under his command at Abe-Ali site. Most of them work on testing the centrifuges. Around 40 people provide security, service, and logistical work for the company.

Centrifuges are tested at Abe-Ali site, while assembling of the centrifuges takes place at Natanz. However, prototypes are installed in Abe-Ali for testing purposes. The regime has been importing centrifuge engines from abroad, disguising them for industrial consumption. The casing and the ball bearings are built In Isfahan.

Abe-Ali site has two 450m long warehouses that are used as workshops. It also has three administrative buildings where the experts and engineers work.

Address in Tehran: Km2.5 Abe-Ali highway, next to Chemical Medicine Company. The Kala electric is located inside the alley.

This information again reveals an extensive and clandestine program pursued by the clerical regime to acquire nuclear weapons as a strategic weapons need for the survival of the regime and its regional domination in the sensitive Persian Gulf region.

The Iranian regime is sparing no effort to procrastinate and buy time to go beyond the point of no return in its derive to acquire the capability to produce nuclear weapons.

At present, the regime is engaged in a delay tactic in response to IAEA’s October 31 deadline. Khatami said a few days ago that even if the government were to accept to sign onto the Additional Protocol, the Majlis and the Guardian Council must also approve that decision. This means that while Tehran is unwilling to abide by its international obligations, it has engaged in these maneuvers to reduce international pressure.

The clerics view nuclear weapons as strategic guarantee for their survival. They believe that once they acquire the bomb, they would have freer rein to export terrorism and Islamic Revolution as nobody would be in a position to challenge them.

The only way to prevent the world from having to deal with the nightmare of a nuclear-equipped fundamentalist regime is for the UN Security Council to dismiss the regime’s ploys and impose binding and comprehensive sanctions against this medieval regime.

Senator Bob Menendez: A Return to the 2015 Iran’s Nuclear Deal Is Not Only Unrealistic and Unproductive, It Is a Fantasy