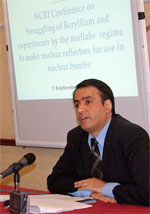 NCRI – Following the resumption of enrichment activities by the Iranian regime, Tim Marshal, the Foreign Affairs Editor of the Sky TV, sought the opinion of Hossein Abedini, member of the Foreign Affairs Committee of the National Council of Resistance of Iran. The following is the text of the interview:

As we speak right now, the Iranian regime is forging ahead with its clandestine nuclear activities and based on reliable information they are secretly assembling 5000 centrifuge machines for installation at the Natanz site and they have prepared platforms and foundations in large underground cascade halls and they are also going ahead with the construction of 14 tunnel complexes and underground facilities throughout Iran for concealing their various parts of the nuclear and missile activities. Mullahs president, Mahmoud Ahmadinejad recently said that his policy of taking a hard-line is paying off and the Europeans have been forced to retreat and accept the illegal resumption of their nuclear activities. And the head of the strategic centre in the Revolutionary Guards Corps which is and advisory group, very close to the president of the Iranian regime, said just a few days ago that Mahmoud Ahmadinejad has been following a policy of shock and awe in its foreign policy. All this really shows that it is high time that Iranian regime’s nuclear file should be sent to the United Nations Security Council. We are talking about a regime which has been deceiving the international community for 18 years and that is repressing the Iranian people and that is the most active state sponsor of terrorism and that had been hiding its nuclear program for many years until we, the National Council of Resistance of Iran revealed its secret sites in Natanz and Arak and other nuclear activities.

Presenter: Can I please just ask one question though. I am interested to hear your view about why president Ahmadinejad is so determined to tough it out. He must know that Jack Straw has said himself that he will now be referred to the UN Security Council. What sort of damage could sanction potentially do to Iran and do you think that president Ahmadinejad is concerned about military action?

Abedini: Ahmadinegad has said and has confirmed that he has made a deliberate and a strategic decision which has been made by the supreme leader Ali Khamenei. In actual fact Khamenei by giving greater powers to the Revolutionary Guards Commanders, IRGC is the elite force of the Islamic Republic of Iran, and apart from Mahmoud Ahmadinejad who is an ex commander of the revolutionary Guards, 13 ministers and 75 percent of civil servants are now from the Revolutionary Guards. And he is doing this to advance his policies in 3 key areas:
1.    Increase suppression of people at home
2.    step up meddling in Iraq
3.    go ahead with its nuclear weapons program.

Presenter: You certainly made quite a lot of sense but the viewers should know that you are part of an organization which is seeking to replace the Iranian regime, I know that it was your organization that first did reveal Iran’s nuclear secrets but that was about 3 years ago since then you have made a lot of allegations, you just made another one this morning in Sky news that they’ve got these 5000 centrifuges. Well the UN doesn’t know about that you haven’t produced the evidence, well I think some viewers will be forgiven for thinking hang on I have heard all these before in the run-up to the Iraq war, where is the hard intelligence that they are doing this?

Hossein Abedini: Well I think we have given very specific information about all the revelations that we have made and according to some reports by Iran Policy Committee which is an independent institution in the United States, they said in a press conference that out of 22 allegations made by the National Council of Resistance of Iran the IAEA unfortunately has only visited and dealt with half of these and some 15 cases has not yet been dealt with by the International Atomic Agency. So we have given very specific information and it has been apart from what we have revealed in Natanz and Arak it was the National Council of Resistance of Iran.

Presenter: Lets go to the chase, Mr. Abedini you want to overthrow the Iranian  government it’s in your interest to put these arguments forward and I am not saying that they are necessarily wrong but lets get to the chase, sanctions are down the line, even further down the line is military action, do you think it should come to that if necessary?

Hossein Abedini: We are very much against the policy of appeasement, the continuation of the policy of appeasement, but we are also very much against another military option and an external war in Iran. We believe that security council referral on its own will not be enough and it’s time for the western governments to once and for all abandon the policy of appeasement and instead they must recognize the democratic aspiration of the Iranian people, and millions of Iranians who want an end to the rule of this religious dictatorship and they want to establish a democratic and secular government in its place. I think one very strong signal to the Iranian people that the west is not just interested in trade and ties with Iran is to end the blacklisting of the main opposition movement the People’s Mojahedin Organisation of Iran.

Reporter: Thank you very much indeed

Previous article
Iran: Diplomacy and Force
Next article
Rajavi: Only solution for Iran is democratic change with Iranian people and Resistance