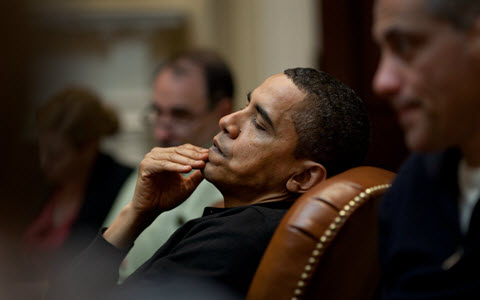 In May 2016, deputy national-security adviser Ben Rhodes took a victory lap in the New York Times to celebrate the Obama administration’s signature foreign-policy win. Rhodes had helped orchestrate the campaign to ensure that Congress would fail to stop President Obama’s Iran nuclear deal from going into effect, and in a remarkably unguarded interview for a New York Times Magazine profile, the failed novelist–turned–foreign-policy spinster boasted of how a tame press corps that he dubbed an “echo chamber” had done his bidding. At the time, some in the Obama camp chastised Rhodes for spilling the beans on how the mainstream media had dutifully bought the president’s disingenuous arguments for a pact that did not end the nuclear threat, expired within a decade (making an Iranian bomb inevitable), and both strengthened and enriched the world’s leading state sponsor of terrorism, with few tough questions asked.

But while Rhodes and the rest of the Obama team have given way to President Trump’s staff, the media echo chamber devoted to defending Obama’s appeasement of Iran that he cultivated is still with us.

The evidence for that was on display this week in the aftermath of Politico’s scoop about the way the Obama administration blocked federal investigations of Hezbollah’s drug-running, money-laundering, and terror operations during the Iran-deal negotiations.

Josh Meyer’s three-part series was based on interviews with Drug Enforcement Administration personnel and other well-placed sources within the federal government who worked on Project Cassandra.

Meyer built a strong case that showed that efforts to halt the regular traffic of cash, drugs, and terrorists between Beirut, Tehran, and Venezuela was quashed by orders from the top of the Obama administration. Then CIA director John Brennan and Secretary of State John Kerry believed nothing should be allowed to interfere with the nuclear talks, even if meant Iran’s narcoterrorist foot soldiers were allowed to escape justice.

Meyer’s report made sense not just because the DEA sources pointed to the way a promising probe had been prevented from making arrests but also because Brennan was on record as believing that Hezbollah “moderates” must be cultivated, and Kerry had made it plain that he was willing to make any possible concession to get Iran to agree to any kind of deal, no matter how weak it might prove to be.

If true, the undermining of Cassandra is a major scandal, since it shows that the Obama administration was willing to prioritize the interests of Iran and its Hezbollah auxiliaries as well as their Russian allies over its duty to protect American citizens. At the very least, it rates a congressional investigation as well as an internal probe of U.S. intelligence agencies to determine exactly what the Obama foreign-policy team knew and when they knew it with regard to decisions taken to hamstring Cassandra operations.

In the days since it was first published, the New York Times has treated it as a non-story. The Washington Post’s sole article on it consisted of a blog post, by one of its liberal opinion writers, devoted to quotes from Obama-administration alumni dismissing both Meyer and his sources as neoconservative propaganda without actually refuting any of the story’s main points. The broadcast channels and the liberal news channels have similarly avoided the scandal. Nor is there any sign that any of the legacy mainstream media are seeking to follow up on Meyer’s reporting to break new angles on a story that examines the nexus between policymaking and law enforcement. The only coverage the Hezbollah scandal has received has been in conservative-leaning media such as Fox News, the Wall Street Journal, and the New York Post. Outlets such as CNN take great umbrage when President Trump and others on the right deride their work as “fake news” because of the liberal bias that is endemic throughout the mainstream media. At the same time, liberals dismiss Fox News as worthless propaganda because of its willingness to give platforms to Trump supporters and to report on stories Democrats don’t like. That Politico, a Washington news website whose liberal bias is no secret, is willing to report on a scandal involving a Democratic administration is to its credit. It also should have signaled to other liberal outlets that this was a story whose implications were so serious that it transcended the usual left–right news divide. Yet after lying down for Obama on Iran while he was in office, the liberal media seem still to be unwilling to hold the former president and his team accountable for the unsavory way in which they gave away American interests in order please a foreign power, the same offense they believe Trump committed with Russia. In doing so, the liberal media are only fueling the conviction of conservatives that nothing they broadcast or publish is to be trusted. Those who lament the bifurcation of the media as well as the tendency of a growing segment of Americans to read, listen to, and watch only those outlets that confirm their pre-existing opinions and biases must look to the mainstream blackout on this story by Obama’s old echo chamber as one more reason why the public has lost faith in the media.

Previous articleGermany Ought to Reconsider Its Policy Toward Iran
Next articleIran: Demise of Iranian Renowned Champion