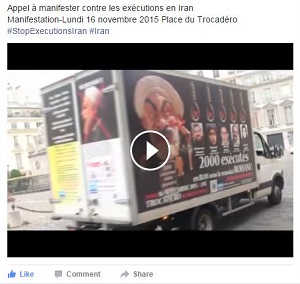 On the eve of the trip by the Iranian regime’s President Hassan Rouhani to France which will coincide with a major rally in Paris on November 16 against the wave of executions in Iran and the mullahs’ export of fundamentalism and terrorism, there has been a noticeable upsurge in online and social media activities exposing human rights violations in Iran.

Facebook pages containing news and information about human rights violations in Iran and Paris protests in connection with Rouhani’s scheduled trip on November 16 have been widely welcomed. Some of these pages have been visited by tens of thousands thus far.

Among the social reactions to this campaign include a video clip posted online by a group of young artists which has received widespread attention, especially by young people.

A significant number of French writers and artists have expressed interest and sympathy with the campaign in defense of human rights in Iran and in protest to Rouhani’s visit to France.

Activists of the campaign have designed several infographics, which are widely distributed and shared on social media websites, in support of the November 16 rally and reject Rouhani and the wave of executions in Iran. One of the infographics, titled “Rouhani, King of executions. More than 2000 executions since his presidency,” has been widely circulated on Twitter, Facebook, Google+ and other social media websites.

Tweet storms with the hashtags #No2Rouhani and #StopExecutionsIran, the main hashtags of this campaign, have been in effect on a daily basis.

In addition to attending sit-ins and protests in recent days, Iranians in France have exposed the horrendous situation of human rights in Iran by driving large trucks carrying large posters denouncing Rouhani’s regime in the center of Paris.

According to a member of the organizing committee of the November 16 rally, these activities in the coming days will increase both in quantity and in variety.