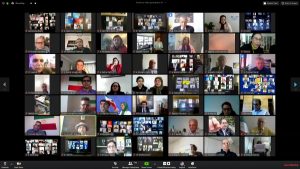 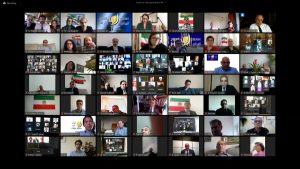 The first speaker of this conference was honorable David Jones, Member of Parliament for Clwyd West since 2005 and the United Kingdoms’ Secretary of State for Wales from 2012 to 2014.

“The whole world is affected by the corona-pandemic right now. All the governments in the world have put forward some regulations and measures to prevent the virus from spreading, treating the infected people and ensuring their populations that they do whatever they can to save lives. However, there is a single regime that does not care at all about its people and that is the Iranian regime,” he said.

“They are trying to use this catastrophe, which is a direct result of their incompetence and cruelty, as an excuse to dismantle the sanctions. The Iranian regime’s chief apologist, Javad Zarif, says that because of sanctions, Iranian medical staffs cannot treat the patients and they cannot protect themselves. However, the regime officials, including the health minister, have said on several occasions that they do not need any equipment to fight against coronavirus. Meanwhile, the regime also expels the Doctors without borders organization who wanted to set up a temporary hospital in Isfahan,” Mr. Jones added, referring to the regime’s intention of using the coronavirus as a lever of oppression.

MP David Jones:
Mullahs rejected all humanitarian aid but demanding $5 bn from the IMF. This will undoubtedly be invested in foreign terrorism & domestic crackdown.@GOVUK must impose sanctions on #Iran regime & its affiliated groups & support Iran ppl’s desire for #FreeIran2020 pic.twitter.com/CuuQHQ4FAT

He concluded by saying: “We must support the Iranian people’s desire for overthrowing this wicked regime and establishing a free and democratic country. Only then Iran and the whole world will be a better place.”

“Once again, during the coronavirus crisis, the people of Iran must pay the price for the regime’s incompetence and inadequacy by their lives. Once again, the regime showed that they do not care about the Iranian people at all. While according to regime’s official data 57 millions of Iran’s population are estimated to live under the poverty line and the situation has been worsened by the pandemic, the Iranian regime prefers to spend the people’s money in other manners, such as blowing into the wars in Syria and Yemen or destabilizing Iraq and Lebanon through their terrorist groups. Meanwhile, the share of the Iranian people from the country’s resources is only suppression, poverty, detention, torture and death,” said Sir Alan Meale, a former member of the Parliamentary Assembly of the Council of Europe from the UK.

“The regime is extremely terrified of a new wave of protests. They know that the Iranian people despise them, and they know that because of sanctions and lack of money they are losing their allies and supporters inside and outside of the country. That’s why they have been using the pandemic to cripple more people,” he added.

Bob Blackman, Member of the UK House of Commons, also addressed the conference over the coronavirus pandemic. He said: “The Iranian regime has been well known for duping everyone and its purpose is to maintain power at all costs.”

“Abusing the COVID-19 pandemic, a campaign is going on which is orchestrated out of Tehran and spearheaded by the Iranian Government to lift all sanctions against the country taking advantage of the coronavirus pandemic that continues to take Iranian lives,” Mr. Blackman added.

Referring to the devastating role by the Revolutionary Guards in spreading the coronavirus across Iran and in the region, Mr. Blackman said: “All evidence on the ground and realities in Iran indicate that the paramilitary terrorist force, the Islamic Revolutionary Guard Corps (IRGC) will be the main beneficiary of the sanction relief granted to Iran given its massive control over Iran’s economy and the import and export of the country.”

Otto Bernhardt a former member of the German Federal and the President of Solidarity Committee for Free Iran, was among the speakers of this conference.  “I speak to you on behalf of and as Chairman of the German Solidarity Committee for Free Iran, and I am very much looking forward to it. At the beginning, I have to say that I have wanted to visit Ashraf 3 several times in the past few months. After the corona pandemic, I will definitely do so,” he said.

“Germany and Europe should tell the International Monetary Fund that if you want to help the Iranian people deal with Corona, the only way is to help independently and under international supervision and not through corrupt clerics,” Mr. Bernhardt added.

Thomas Nord, a renowned German politician, also elaborated on the coronavirus pandemic in Iran.  He said: “Doctors, nurses and medical personnel are the heroes of this time in every country. They fight the virus on the front line and risk their lives to save the lives of others. In a black dictatorship like Iran, just like committed doctors and nurses, civil resistance is required to keep hope alive in people’s hearts. Hope for freedom.”

Referring to the restive Iranian society, Mr. Nord said: “A society that becomes aware of its power becomes very dangerous for the dictatorship. So, the coronavirus pandemic can be the doom for mullahs. In this situation, the Iranian Resistance is the best friend of the people in difficult times. In this situation, one should welcome the Iranian Resistance, whose heart beats in Ashraf 3.”

Toby Perkins, Member of the UK House of Commons, was also among the speakers of this event. He told the audience: “COVID-19 has caused enormous fatalities and economically has put people under massive pressure everywhere but in Iran, the situation is shockingly worse because there is an unusually tyrannical and corrupt regime in power.”

“Instead of providing the poor people with their life essentials, this regime is destroying their houses which are supposed to shelter the people against COVID-19.  COVID-19 has been a good exam for all the governments of the world in fulfilling their duties towards their people and the Iranian regime has failed in a distinctively terrible manner.”

While referring to the efforts made by Mrs. Maryam Rajavi, the president-elect of the National Council of Resistance of Iran (NCRI), Toby Perkins said: “Madam Rajavi is right in saying that the massacre of the opposition members by the religious theocracy has now been extended to the mass murder of the Iranian children amid the Coronavirus tragedy.”.

Martin Patzelt, member of Germany’s Bundestag, was the next speaker of this event. He said: “The European Union and the High Commissioner for Human Rights, the Secretary-General of the United Nations and the relevant international bodies must pressure the Iranian regime to release or quarantine all prisoners because the corona is widespread in prisons. This is a matter of serious international concern and we have to be the voice of these prisoners.”

“Indeed, the Iranian people are fighting on two fronts for the right to life: against the coronavirus and against the misanthropic mullahs. The mullahs’ balance sheet is summarized in obfuscation, inaction, corruption, and oppression. Coronavirus and the Mullahs are on a common front against Iranian citizens. The mullahs have to go along with the COVID-19,” he added.

Representatives of the Iranian communities in Canada, Germany, and the UK were also among the speakers of the event.

Vida Nicktalan, from the Iranian community in Germany, said: In these difficult days we support the Iranian resistance and our compatriots inside Iran. We understand your pain and suffering which has multiplied. We constantly follow news and our hearts ache when we hear the suppression of mullah.

Vahideh Khuramroudi, the member of the Iranian-Canadian community in Canada, told the event: We know regime gives false figures and spends billions of dollars for other use that its People. It does not use resources for the nation but on suppression guards and proxies.”