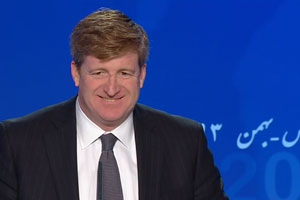 Former US Congressman Patrick J. Kennedy has written in Thursday’s edition of The Hill in support of international recognition for the Iranian Resistance.

“On June 13, Iranians supporting the main opposition, the National Council of Resistance of Iran (NCRI), held a major convention in Paris to support democratic change in their homeland. The massive rally drew as many as 100,000 Iranian exiles and hundreds of international political personalities, including dozens of distinguished former US officials from both sides of the aisle,” Mr. Kennedy wrote. “Tehran’s lobby abroad spends millions of dollars in an effort to demonize the group internationally and prevent it from receiving political support in western capitals.”

“The giant Paris rally was one of the clearest indications so far that there is an alternative to the regime ruling Iran”, he wrote, adding that the Iranian regime is “world’s number one pariah state.”

“The NCRI, a coalition of Iranian opposition groups and personalities led by Maryam Rajavi, has a published platform seeking a democratic pluralistic republic based on universal suffrage, freedom of expression, abolition of torture and the death penalty, separation of church and state, a non-nuclear Iran, an independent judicial system, rights for minorities, peaceful coexistence in the region, gender equality and commitment to the Universal Declaration of Human Rights.”

“That is an extraordinary alternative that Washington has avoided at its peril,” he said.

“The main group within the NCRI is the Mujahedin-e-Khalq (MEK or People’s Mojahedin Organization of Iran), a Muslim movement which espouses a tolerant interpretation of Islam, compatible with Western democracy. Not surprisingly, the mullahs view the MEK as their arch nemesis, and the vast majority of political prisoners executed in Iran are sympathizers of the group. This movement was the first to alert the world to the regime’s secret nuclear sites in 2002.

“One of the best indicators of the group’s popularity is the annual Paris convention. The huge number of Iranians gathering in Paris gives voice to the Iranian people’s desire for regime change and democracy. I have not heard of any other opposition group to any other regime that has managed to rally such extensive support for their cause.

“Looking at images of the June 13 rally, it’s fitting to describe the gathering as a microcosm of Iranian society. Young and old, rich and poor, and people of all religious beliefs attended the event from all walks of life, although the majority are educated, urban, middle-class Iranians.

“Today, Iranian society is brimming with calls for regime change. Despite a sharp rise in the number of executions, in 2015 alone we have witnessed major anti-government protests by teachers, women and ethnic minorities. The West has a moral obligation to side with these brave democrats as they struggle under the yoke of repression.

“Bizarrely, some in Foggy Bottom, the Quai d’Orsay and Whitehall, hopelessly eager to cut a deal with Iran to abandon its nuclear weapons program, often claim that there is no viable alternative to the mullahs’ regime. They need this fabricated argument to justify their relations with the religious fascists ruling Iran.

“Consistent with our nation’s proud tradition, our administration must align itself with the desires of the overwhelming majority of Iranians for democratic change by the people and their organized Resistance. I join dozens of other prominent former American officials in calling official government dialogue with the NCRI.”