Patrick Kennedy: MEK Has Been on the Side of Freedom Whether Fighting the Oppression of the Shah or Regime of the Mullahs in Iran 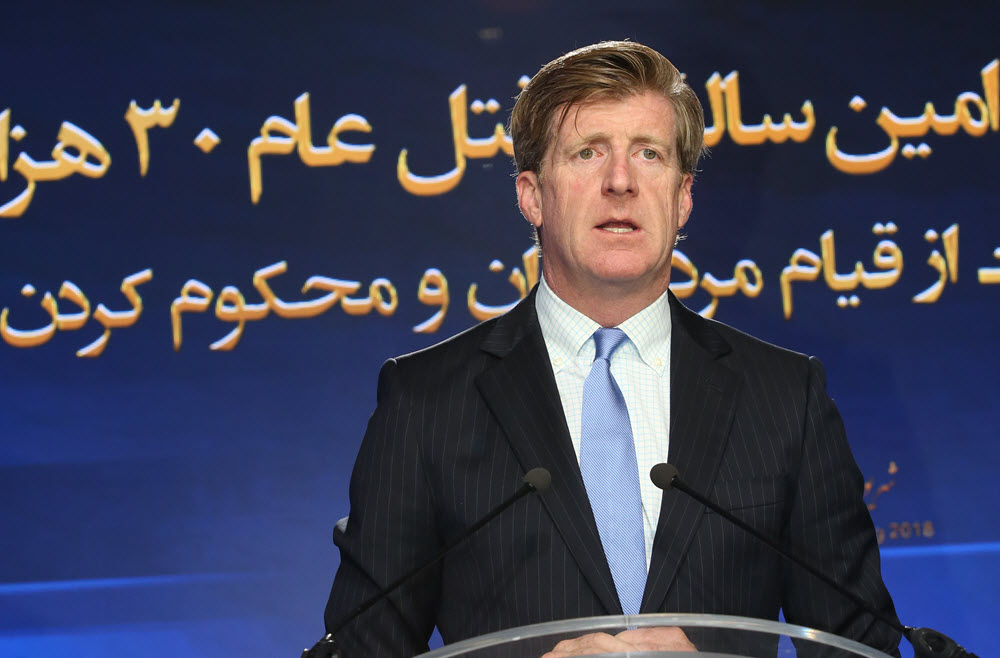 Iranians commemorated the 30,000 political prisoners massacred in 1988 in Iran, in an online conference simultaneously held in 20 major cities and capitals of Europe and North America. The participants declared support for the Iranian people’s uprising to overthrow the regime and for the National Council of Resistance of Iran as the regime’s democratic alternative.

Mrs. Maryam Rajavi, the President-elect of the National Council of Resistance of Iran; former U.S. Congressman Patrick Kennedy; European elected representatives, as well as a number of political and religious dignitaries and jurists participated in these gatherings.

The following are the remarks made by Patrick Kennedy:

So I’ve said in previous events when it came to standing up for those were trapped in Ashraf, when it came to other struggles, for human Rights for Iran, that this is not an Iranian issue, this is a human rights issue. And it’s the reason why we have people from all over the world gathered to mark this 30th anniversary of 30,000 political prisoners being summarily executed by a totalitarian fascist regime. Because we must remember them. Because if it can happen in Iran, in a modern era, it can happen anywhere in the world, where people do not stand up and stand up for human rights and those who suffer.

We are here today to remember these 30,000 martyrs because it’s important for all of us to know that there but for the grace of God goes each and every one of us and our families. And that is why I say this is not just an Iranian cause, this is a universal human rights cause. And as I often say, it is for that reason that I proclaim *. How incredible it is that on this 30th anniversary of these martyrs dying for freedom in Iran, that we have a new generation of people in Iran willing to stand up and proclaim their support for a new Iran that is free and democratic and respects the freedom of religion and the role of women in society.

As Maryam Rajavi just said, none of this would happen if it weren’t for an organization to support these resistance units.

And I want to thank all of you who are watching this program, I want to thank the MEK and Madam Rajavi, because you are the ones who are keeping the flames of resistance going strong.

So the MEK has been there on the side of freedom whether it was fighting the oppression of the Shah or today fighting the theocratic regime of the mullahs.

Finally, as an indication of how effective you’ve been Madam Rajavi, it is remarkable the courage of the young people today in Iran.

They are in the streets across Tehran shouting “Down with Khamenei and Rouhani”, “Down with the dictator”, they are rejecting both sides of the regime saying hardliners, reformists, the game is over.

They are no longer being confused by those who say they’re moderates we know that all of them are on the side of oppression. All of them are on the side of dictatorship. And if you never felt that the MEK was making a difference, all you need to know is that the MEK is the target, the top target of these mullahs as they attempt to bomb both in Albania and in the Paris gathering, they are targeting in the U.S. MEK activities.

Why would the regime spend so much time and energy targeting the MEK if they did not know that the MEK was an existential threat to their continuing as a fascist dictatorship in Iran? A great pride in the fact that they are the number one target of this clerical fascist regime, because it’s a sign that their work trying to bring about change in Iran is a threat to them.

So to the young protesters all across Tehran who are honoring the martyrs, 30,000 martyrs over 30 years ago, they are honoring their sacrifice by taking to the streets all across Iran, let me just say a personal word: today is also the anniversary of my father’s death but I was very fortunate, my father lived a full life and he died of natural causes.

I cannot imagine being any one of those family members who lost a loved one due to the fatwa; I cannot imagine having to live my life knowing that somewhere across Iran, my father, my mother, my sister or brother’s remains are scattered somewhere in a field that no one has yet located.

So I will say this is why we all are here today, to re-pledge ourselves to the sacrifice that was made 30 years ago and to make good on that sacrifice by bringing back a new and free and democratic Iran.