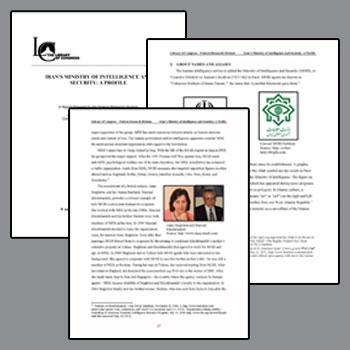 NCRI  – A recent investigative report by Pentagon released in December 2012, revealed that Anne Singleton and Massoud Khodabandeh are agents of the mullahs’ Ministry of Intelligence and Security (MOIS).  It underscored that the web site Inter-interlink.org was set up explicitly upon Tehran’s orders.

The 64 pages long report , titled “Iran’s Ministry of Intelligence and Security: A profile”, was prepared under an Interagency Agreement with the Combating Terrorism Technical Support Office’s Irregular Warfare Support Program. It was released by the Federal Research Division of Library of Congress.

The MOIS  actively supports Revolutionary Guards Corps (IRGC) of mullahs in Iran that has been involved in terrorist bombings from Argentina to Lebanon, according to the report. The MOIS recruits foreigners, including British nationals.

The report stipulated that in order to confront the People’s Mojahedin Organization of Iran (PMOI/MEK), the MOIS recruits non-Iranians as well as Iranians.

The report that published the pictures of  Khodabandeh and his wife reveals that Anne Singleton “made many trips to Iran and Singapore- the country where the agency contacts its foreign agents.”

According to the Pentagon report, she received training from MOIS “During her stay in Tehran.”